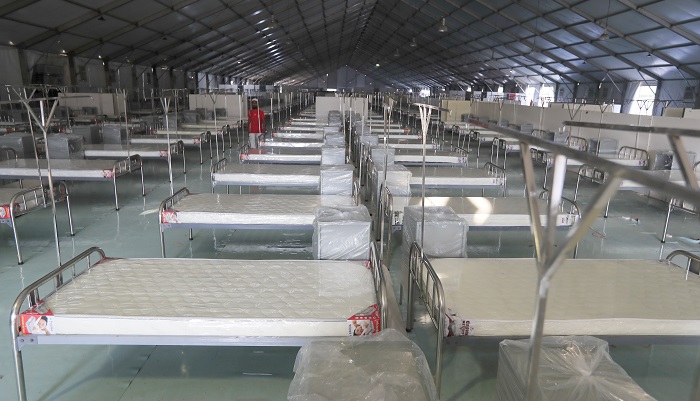 The largest makeshift hospital in the country for treating coronavirus infected patients at the International Convention City Bashundhara (ICCB) in the capital is getting ready to be inaugurated shortly.

Sources claimed that the hospital works are almost completed to be opened anytime by the government authorities concerned.

ICCB will be used as hospital for the time being. The convention centre will return to its previous status housing trade fair and other events after the corona is over.

Officials of Health Engineering Department (HED) of the government are supervising the construction work of the noble initiative undertaken by Bashundhara Group, one of the largest industrial conglomerates of the country.

ICCB Chief Executive MM Jasim Uddin along with HED Executive Engineer Masudul Alam on Friday briefed media about the progress of the work.

The hospital is expected to be operational by the end of this month. However, finalization of date of inauguration depends on the ministry of health. However, Health Minister Zahid Maleque is yet to visit the hospital.

Officials of HED and Bashundhara Group have been working relentlessly for last couple of weeks to expedite the hospital works.

“Initially, we have decided to set up 2,084 beds including 71 Intensive Care Units (ICU). As of Friday, 750 beds were ready,” he said. If necessary, hospital will be expanded with more beds, he added.

Meanwhile, the noble initiative of the Bashundhara Group to convert its trade centre and convention centre into a makeshift hospital has already been acclaimed at home and abroad.

Diplomats of different foreign missions and United Nations (UN) agencies in Dhaka have highly appreciated the Bashundhara Group’s initiative. They said the country’s largest hospital will contribute greatly to the treatment of coronavirus patients.