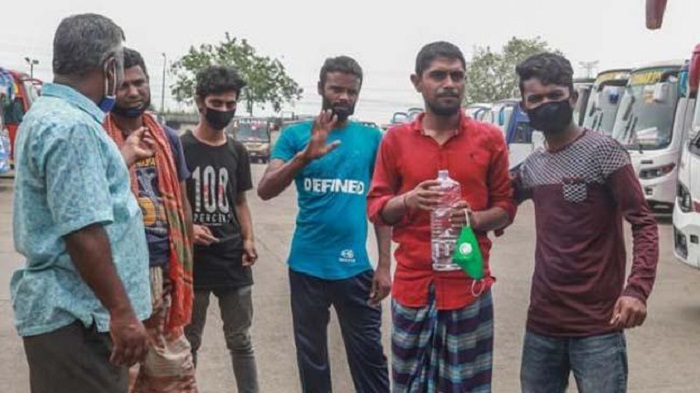 Before the Covid-19 stormed the country, Sohel Rana worked as a bus driver for a private transport company. He used to make 2-3 trips to take passengers from the capital’s Jatrabari to Gabtoli and earn Tk. 400 per trip.

Since March 25, when the undeclared lockdown began, he was passing idle time until one of his senior brothers asked him to work as a night guard in the Mohakhali bus terminal. Now Sohel earns 200 every day which is never enough to run his five-member family. Yet he considers himself lucky as most of his fellow drivers and helpers have no source of income during this hard time. While driving a bus, they were bound to pay Tk 70 per day as a contribution to the transport owner’s and worker’s association. But now when the vehicle workers need financial aid most all the associations have remained mum. None of these organisations have stepped forward to help them yet.

Apart from speaking with Sohel Rana, this correspondent has talked with several transport owners, union leaders and workers of four bus-truck terminals of the capital. They all have confirmed a contribution of Tk 70. Of the money Tk 40 goes to the bus owner’s association and the transport worker’s federation gets Tk 30. There are 4.4 million transports in the country which are registered with Bangladesh Road Transport Authority (BRTA) and at least 8 lakh of them are operated on a commercial basis. If Tk 70 is collected from each of these transports, Tk 5 crore and 60 lakh are collected per day! In that case, transport owners’ and workers’ associations get Tk 168 crore every month from extortion! It means they extort around Tk 2016 crore per year from this sector!

More than 7 million people work in our transport sector. The majority of these transport workers are now struggling to survive as only 2-3% of the total transports are still in operation to carry different goods. Albeit according to the transport act they were supposed to receive appointment letters stating about their monthly wage. But in reality, almost all the transport companies recruit them on a contractual basis and these drivers and helpers are paid according to their number of trips! Their income has stopped with the trips to their transports.

Therefore they and their family members have been going through a terrible time. Every day these transport workers donated a certain amount of money to a fund operated in the name of their welfare. But during their crisis moment, none of these workers knows where the people who maintain this fund!

Bangladesh Sarak Poribohon Sramik Federation general secretary Osman Ali stated that “Transport workers are passing a miserable time. Most of them already have spent their hard earned savings. In such a situation we are working to help them. We are communicating with the government officials so that they provide aids to the transport workers.” When asked that what steps they have taken to assist the hapless transport workers from their fund he replied, “in case of death of a worker, treatment, their children's study or marriage, we spend money for their wellbeing all around the year. We are continuing that and allocating more money for them in this critical time. But we have a scarcity of funds. I hope the government will stay beside us.”

According to the transport sector insiders, a syndicate has been developed by some influential transport owners and labour leaders. They have been making their fortune depriving common transport workers. Extortion on roads was legalised in the name of labour welfare. But now when necessary, the underprivileged workers are not getting anything from those so called welfare funds. Yet the transport owners and worker leaders involved in maintaining those funds are remaining unaccountable. Is there anyone at the policy level to address this issue?