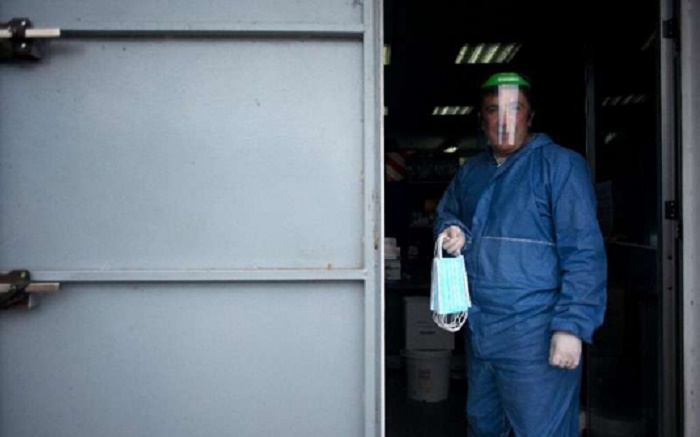 COVID-19 has overshadowed the climate crisis as governments scramble to protect the health of citizens without cratering their economies, but the pandemic could still open a fast-track pathway — albeit a narrow one — to a greener, low-carbon future, experts say.

The Chinese term for “crisis” (weiji) is famously composed of two characters, one meaning “danger” and the other “opportunity”.

For now, economists see a lot more of the former than the latter.

What the IMF has called the “Great Lockdown” will likely slice $9 trillion off of global growth over the next 20 months, and lower projected GDP in 2020 by more than 6 percent.

And that is an optimistic scenario, according to the global lender of last resort. If the pandemic extends into 2021 — as well it might — GDP “may fall next year by an additional eight percent,” IMF chief economist Gita Gopinath said in a blog post last week.

In the short-term, coping with COVID-19 is understandably the singular focus of leaders around the world, even if they are responding very differently.

But unless climate change is factored into decisions taken in the coming weeks and months, the Paris Agreement target of capping the rise in global temperatures at below two degrees Celsius above pre-industrial levels could easily be definitively missed.

To some extent, it’s about following the money.

“Governments are spending loads to keep their economies afloat,” Michael Oppenheimer, a professor of geosciences and international affairs at Princeton University, told AFP.

“Money can be spent in ways that are neutral to the climate problem, or in ways that makes the problem worse or better.”

For Stephen Hammer, global director of the World Bank’s climate change team, the urgent focus on short-term needs must not obscure long-term goals.

“Prime among these: the decarbonisation of the world economy,” he wrote in a recent blog post along with World Bank economist Stephane Hallegatte.

Stimulus packages in the trillions, they argue, should include investment and job creation in renewable energy production, energy efficiency, building resilience against floods and droughts, restoring polluted lands, and sustainable public transport.

Massive cash injections should steer clear, they added, of fossil fuels, noting that the recent collapse of oil and gas prices — with a US benchmark plunging into negative value Monday — is an opportunity to redirect investments and subsidies.

In Europe, 17 climate and environment ministers issued a joint statement earlier this month vowing they would “not lose sight of the persisting climate and ecological crisis.”

The EU bloc’s Green Deal, they said, “constitutes a new growth strategy… which is able to deliver on the twin benefits of stimulating economies and creating jobs while accelerating the green transition.”

The European Union will play a pivotal role in climate diplomacy, said Laurence Tubiana, CEO of the European Climate Foundation and, as France’s top negotiator, an architect of the 2015 Paris climate treaty.

“I’m always reluctant to talk about a ‘make or break’ moment, but if we have already invested all our capacity and resources — national and European — in the wrong places, I’m pessimistic,” she told AFP.

China has so far sent mixed signals as to how much green it will inject into its recovery efforts.

After the 2008 global recession, Beijing poured trillions of yuan into energy-intensive infrastructure projects, resulting in a large surge of CO2 emissions from coal-fired power.

“The Chinese government has so far been fairly restrained in terms of throwing easy money — investments and credits — into the market,” he told journalists from Beijing in a phone briefing.

At the same time, he added, climate is clearly not at the top of Beijing’s agenda.

In the United States, President Donald Trump has pushed hard to funnel hundreds of billions of dollars to the oil and gas industries, while also propping up the commercial airlines that use their products.

For Elizabeth Wilson, director of the Arthur L. Irving Institute for Energy and Society at Dartmouth College, the size and mix of stimulus packages doesn’t bode well for climate action.

“The trillions of dollars of public and private capital for a large-scale transition to simultaneously cut greenhouse gases while adapting to a changing climate will likely not be available,” she told AFP.

In the developing world, the one-two punch of the pandemic and climate impacts are already wreaking havoc.

“Any support to help developing countries cope with coronavirus should also strengthen their resilience to climate change.”

Global warming has not been put on hold during the pandemic.

A monster cyclone barrelled through the South Pacific earlier this month, ravaging four Pacific island nations, while a once-in-a-millenium drought has gripped the American Southwest.

Other observers are more optimistic that the pandemic can be leveraged to boost climate action.

The global lockdown has reduced overall energy use and CO2 emissions, pushed some countries in Asia to replace coal-fired power with less polluting gas, and encouraged investment in renewable energy rather than imported fossil fuels, noted Jeffrey Sachs, director of the Center for Sustainable Development at Columbia University.

– ‘Experience of a generation’ –

“All in all, the crisis will reduce CO2 emissions and accelerate the shift to renewable energy,” he told AFP.

With more than half of humanity under stay-at-home orders, habits may also change once the pandemic — which could last month, or even years — subsidies.

“For teens and millennials, this will be the experience of a generation, much like the generation that grew up in, and was marked by, the Great Depression,” Oppenheimer said.

“People may find out that the can do without costly and annoying practices such as commuting,” he added.

Flying half-way round the world for a week-long holiday might no longer seem like a good idea.

Companies may find that flex-hours and encouraging staff to work-at-home is to their advantage.

The wild-animal origin of the pandemic, meanwhile, has driven home as never before the message that disturbing and destroying Nature has consequences.

“The climate agenda must come back to the foreground, because it goes hand in hand with the health agenda,” French President Emmanuel Macron told the Financial Times on April 14.

“When human lives are at stake, what we thought was impossible becomes possible.”

In terms of climate diplomacy, the pathway to a successful “COP 26” climate summit in Glasgow — postponed until next year — has always been very narrow.

But the prospect of a Democratic administration in the United States — possibly backed by a Democratic House and Senate — could boost the odds of meaningful progress, experts say. The US election in on November 3.

When asked how much of an optimistic scenario for climate action depended on Trump being voted out of office, Oppenheimer’s reply was direct.