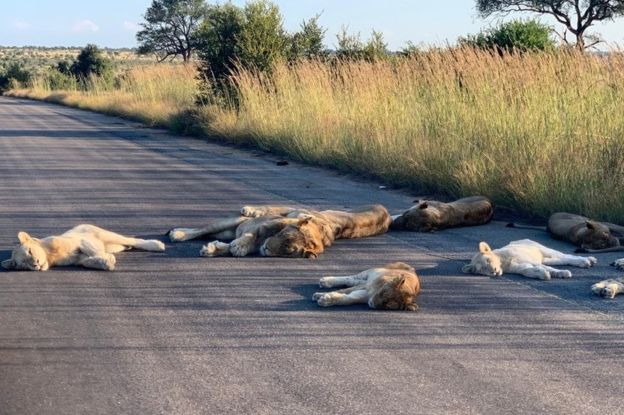 Sooner or later animals were going to notice that the humans had disappeared and in South Africa's Kruger National Park lions have been taking advantage.

Park ranger Richard Sowry was out on patrol on Wednesday when he snapped a pride sleeping on a road which would normally be busy with tourists.

But Kruger, like other wildlife parks, has been shut since 25 March as part of the coronavirus lockdown.

Big cats would usually only be seen by rangers on the roads by night.
How were the pictures taken?
As a ranger in one of Africa's largest game reserves, Mr Sowry performs an essential service and continues to work during the lockdown, checking on the wildlife and guarding against poachers.

While driving near Orpen Rest Camp on Wednesday afternoon, he spotted the lions on the road ahead and pulled up just five metres (5.5 yards) away to look at the unusual phenomenon.

As he took photos with his mobile phone, the lions did not seem bothered, most of them apparently fast asleep.

"Lions are used to people in vehicles," he explained. "All animals have much more of an instinctive fear of people on foot, so if I had walked up they would never have allowed me to get so close."
The oldest lioness in the pride is about 14, "which is very old for a lioness", so they are used to seeing vehicles.

Normally Mr Sowry would only see lions sleeping on the park's roads on colder nights in the winter, when the tar retains quite a lot of heat.

Goats take over empty streets of Welsh town
What rangers do not want, however, is for lions to start thinking that roads are a safe place just because they are now so still.

How is the lockdown affecting the park?
These quiet times have also seen lions as well as wild dogs venturing on to a golf course in the park but otherwise Mr Sowry does not think that the lockdown has had any major effect on the animals' behaviour yet.
"Kruger is a very wild place," he says. "It has been wild and it is still wild."

He is just happy to share his photos with people who cannot visit the park right now because of the coronavirus pandemic.

"These are difficult times for everyone and the intention was to bring people joy," he says.

To date, South Africa has recorded 34 deaths of people with Covid-19 and registered 2,506 cases of infection, making it the most affected country in Africa.
Its lockdown was extended on Wednesday by two weeks.

"Everybody realises the importance of the lockdown and the rangers are there to do their normal duties," says media officer Isaac Phaala. "To maintain the infrastructure takes quite a bit of work so that when the park opens, you don't start from scratch."

As for the lions, he adds, "normally they would be in the bushes because of the traffic but they are very smart and now they are enjoying the freedom of the park without us".

But why anyway, you might ask, would lions prefer tarmac to the softness of grass?

Probably for the simple reason that it had been raining on Tuesday night and, as Mr Phaala explained, "The tar was drier than the grass at the time - big cats and water don't mix."