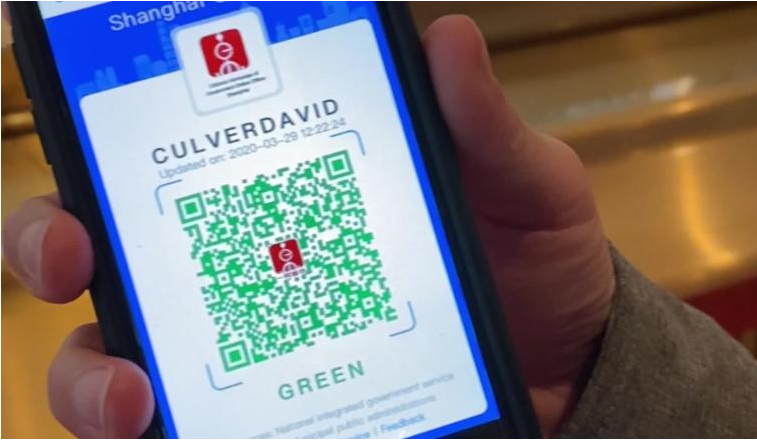 Imagine your daily routine being entirely dependent on a smart phone app. Leaving your home, taking the subway, going to work, entering cafes, restaurants and shopping malls — each move, dictated by the color shown on your screen. Green: you're free to proceed. Amber or Red: you're barred from entry.

This has been the reality for hundreds of millions of people in China since midway through the coronavirus crisis — and it could yet stay that way for the foreseeable future, as the country battles to recover from it.
Relying on mobile technology and big data, the Chinese government has used a color-based "health code" system to control people's movements and curb the spread of the coronavirus.

The automatically generated quick response codes, commonly abbreviated to QR codes, are assigned to citizens as an indicator of their health status.
Although authorities have yet to make the health codes compulsory, in many cities, citizens without the app wouldn't be able to leave their residential compounds or enter most public places.

Three months on, with the virus largely contained and lockdown measures gradually lifted across most of China, the small square barcodes have remained in place and are still ruling people's lives.
Following China's lead, other governments have also turned to similar technology to battle the virus.

Singapore last month launched a contact-tracing smartphone app, which would allow authorities to identify people who have been exposed to Covid-19 patients. The Japanese government is considering the adoption of a similar app. Moscow has also introduced a QR code system to track movements and enforce its coronavirus lockdown.
"Technology now plays a critical rule in containing the pandemic," Xian-Sheng Hua, a health AI expert at China's e-commerce giant Alibaba, told CNN Business.

"To stop the spread of the virus, contact tracing is an essential step and this is why similar initiatives are being adopted in places around the world," added Xian-Sheng.

How does it work?
The Chinese government has enlisted the help of the country's two internet giants — Alibaba (BABA) and Tencent (TCEHY) — to host the health code systems on their popular smartphone apps.
Alibaba's mobile payment app Alipay and Tencent's messaging app Wechat are both ubiquitous in China, each used by hundreds of millions of people. Placing the health codes on these platforms means easy access for many.

Hangzhou, a coastal city in eastern Zhejiang province where Alibaba is based, was among the first cities to use the health codes to decide which citizens should go into quarantine. The system was launched on February 11 by Alipay.

To obtain a health code, citizens have to fill in their personal information including their name, national identity number or passport number, and phone number on a sign-up page. They're then asked to report their travel history and whether they have come into contact with any confirmed or suspected Covid-19 patients in the past 14 days. They also need to tick the boxes for any symptoms they might have: fever, fatigue, dry cough, stuffy nose, running nose, throat ache or diarrhea.

After the information is verified by authorities, each user will be assigned a QR code in red, amber or green.
Users with a red code have to go into government quarantine or self-quarantine for 14-days, users with an amber code will be quarantined for seven days, while users with a green code can move around the city freely, according to a statement issued by Hangzhou authorities.

The health codes can also serve as a tracker for people's moves in public areas, as residents have their QR codes scanned as they enter public places. Once a confirmed case is diagnosed, authorities are able to quickly backtrack where the patient has been and identify people who have been in contact with that individual.

A person familiar with the development of the health codes on Alipay told CNN Business that the system was developed and operated by government agencies, and Alipay only provides the platform and tech assistance.

Meanwhile, Tencent also developed a similar health QR code system on Wechat, first introduced in early February in the southern city of Shenzhen, where Tencent is based.

How widely is it used?
Within a week of its launch, the Alipay health codes were rolled out in more than 100 cities across the country, the state-run Xinhua news agency reported.

n February 15, the e-government office under the State Council instructed Alipay to speed up the development of a health QR code to be rolled out nationwide, Xinhua said.
"A digital epidemic prevention 'sky net' is rolling out on a full-scale with the Chinese speed," the Xinhua report said.

By late February, more than 200 cities had adopted these QR codes, according to Alipay.
Tencent's health code system had also expanded to more than 300 cities as of last month, according to the state-run Science and Technology Daily.