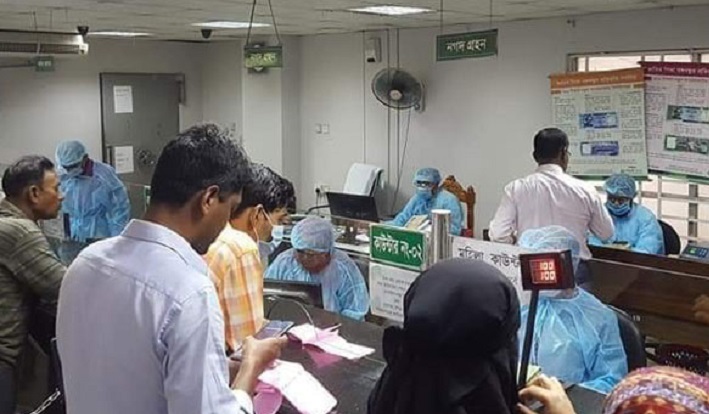 Some banks are allegedly realizing installment of loan violating order of the government exempting borrowers from the burden of payment.

In a follow-up to the government decision, Bangladesh Bank issued an order on the exemption to be effective for some months following corona pandemic.

The whole world has become a cavity of death as the virus appears to have been swallowing mankind for last couple of months.

Human civilization is on the brink of destruction for rapidly spreading infection and failure of scientist to invent any vaccine and drug.

Covid-19 is not only causing deaths of people but also taking a heavy toll on economy.

Like other parts of the globe, Bangladesh is worst affected with the corona pandemic.

The government has announced special holidays for all public and private officials for the sake of social distancing.

People except related to administration, healthcare, journalistic houses and emergency services are confined to their homes.

Most of the major cities are under virtual lockdown affecting the human life.

Hundreds of thousands of people have become unemployed due to closure of shopping malls and other trading centres.

Investors ranging from small to big have become equally affected as their products are not being sold.

People are only buying groceries, vegetables, medicines and sanitizers. Producers and sellers of many other products are counting colossal loss.

Workers of those industries and trading centers have become paupers for lack of wages.

Against this backdrop, the government announced loan holidays relieving recipients of monthly installment.

Bangladesh Bank also asked all scheduled banks not to realize monthly installment from the borrowers.

Violating the order, some banks are allegedly realizing installments intensifying sufferings of entrepreneurs and general borrowers.

Experts want the government and central bank to come up with fresh order to stop realization of loan installment.

Jahangir Alam, a RMG owner, told a private TV that he never experienced such economic hardship in last two decades.

He demanded the exemption to be effective for at least six months prospectively.

SM Fazlul Haque, ex-president of BGMEA, said “Prime Minister Sheikh Hasina will obviously intervene to save entrepreneurs from this debacle.”

Survival of banks is dependent upon future of industrialists and general investors.

So, banks should save the industrialists and depositors for their own interest, he said.

“The central bank should strictly monitor execution of its order on loan installment exemption. The government will have to take hard-line stand to save industrial and business sector which is key to country’s economic development.”