Sweden refuses to lock down 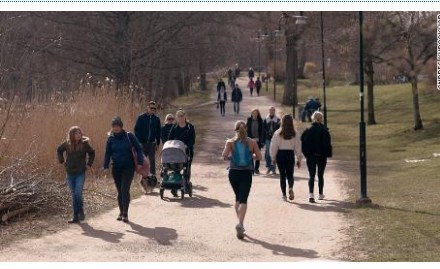 Much of Europe is still on coronavirus lockdown, with severe restrictions on movement and penalties for those who transgress.

But not Sweden. Restaurants and bars are open in the Nordic country, playgrounds and schools too, and the government is relying on voluntary action to stem the spread of Covid-19.

It's a controversial approach, and one that's drawn US President Donald Trump's attention. "Sweden did that, the herd, they call it the herd. Sweden's suffering very, very badly," Trump said on Tuesday.

But the Swedish government is confident its policy can work. Foreign Minister Ann Linde told Swedish TV on Wednesday that Trump was "factually wrong" to suggest that Sweden was following the "herd immunity" theory -- of letting enough people catch the virus while protecting the vulnerable, meaning a country's population builds up immunity against the disease.

Sweden's strategy, she said, was: "No lockdown and we rely very much on people taking responsibility themselves."
The country's state epidemiologist, Anders Tegnell, also pushed back against Trump's criticism that Sweden was doing badly. "I think Sweden is doing okay," he told CNN affiliate Expressen. "It's producing quality results the same way it's always done. So far Swedish health care is handling this pandemic in a fantastic way."

As of April 9, Sweden has 9,141 cases of the Covid-19 virus and 793 deaths, according to Johns Hopkins University figures.
Sweden's actions are about encouraging and recommending, not compulsion. Two days after Spain imposed a nationwide lockdown on March 14, Swedish authorities were encouraging people to wash hands and stay at home if sick. On March 24, new rules were introduced to avoid crowding at restaurants. But they very much stayed open.

So did many primary and secondary schools. Gatherings of up to 50 people are still permitted.
Tegnell defended the decision to keep schools open. "We know that closing down schools has a lot of effects on health care because a lot of people can't go to their work anymore. A lot of children are suffering when they can't go to school."

Elisabeth Liden, a journalist in Stockholm, told CNN the city is less crowded now. "The subway went from being completely packed to having only a few passengers per car. I get the sense that a vast majority are taking the recommendations of social distancing seriously."

But she added that while "some Swedes won´t even kiss their spouse, others are throwing Easter parties."