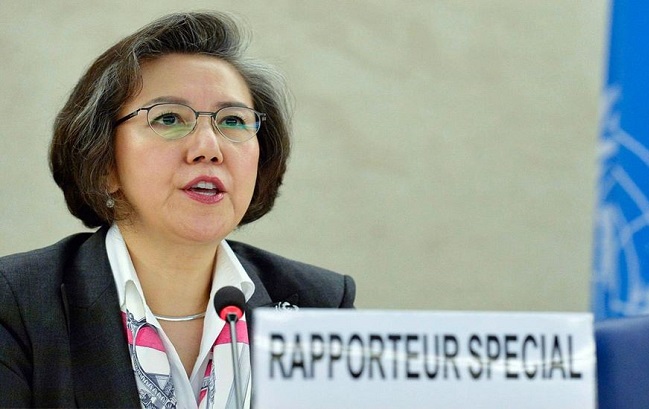 The independent human rights expert who monitors Myanmar has condemned the crackdown on the rights to freedom of expression and access to information that is related to ongoing armed conflict and risks undermining efforts to fight the COVID-19 pandemic in the country.

“I echo the UN Secretary-General’s call for a global ceasefire at this critical time and ask all parties to all conflicts in Myanmar to have an immediate and total ceasefire to facilitate the fight against COVID-19,” said Yanghee Lee, the UN Special Rapporteur on the situation of human rights in Myanmar.

The Myanmar Government declared on 23 March that the Arakan Army, which is fighting the military in Rakhine and Chin States, is a terrorist organisation. When news outlets Naranjara, Myanmar Now and Khit Thit later published interviews with an Arakan Army spokesperson, editors Khaing Myat Kyaw, Thar Lun Zaung Het and Nay Myo Lin were charged under the Counter-Terrorism Law 2014. Nay Myo Lin was arrested and will face court today, and Khaing Myat Kyaw and Thar Lun Zaung Het are in hiding.

“I condemn the terrorism charges that have been laid against Khaing Myat Kyaw, Thar Lun Zaung Het and Nay Myo Lin for doing their job as journalists,” the expert said. “These journalists were reporting on the escalating armed conflict in Rakhine State, where the Government has imposed a mobile internet shutdown. As such, their reporting was of the highest public interest value and should be protected.”

The Ministry of Transport and Communications has also recently directed all internet service providers in Myanmar to block 221 websites, including news agencies based in ethnic minority States. This is in addition to the mobile internet shutdown imposed in nine townships in Rakhine and Chin States since last year.

“Censorship of the media at this time is deplorable. The right to access information is vital during the COVID-19 emergency in Myanmar, including in ethnic minority States. Furthermore, the right to seek, receive and impart information concerning health issues is a component of the right to health,” Lee said in a press statement in Geneva today (Thursday).

“I call on the Government to ensure that all people in Myanmar can exercise their rights to freedom of expression and access to information. The charges against the journalists must be dropped, the censorship order withdrawn, and the mobile internet in Rakhine and Chin States should be reinstated in all areas.”
The UN expert also expressed concern about repeated Government statements that people who spread “fake news” would be prosecuted, including under a proposed amended Prevention and Control of Communicable Diseases Law.

“Unlike other countries who are releasing prisoners to protect prison populations from the virus, Myanmar continues to arrest people for non-violent offences in relation to conduct that is within their rights. State authorities must not misuse the crisis situation to crack down on human rights defenders, journalists, health workers and others who provide information that is perceived to be critical or is exposing human rights violations, including those that may occur during the COVID-19 emergency response.”

Lee added that it is also critical that people throughout the country have access to assistance, which is now impeded by restrictions on humanitarian access in conflict-affected areas, including to camps for internally displaced persons, where hundreds of thousands of ethnic minority people live in cramped conditions, and are vulnerable to the virus.

“The Government must lift the humanitarian restrictions to ensure that what assistance is available can reach all who need it, without discrimination,” the Special Rapporteur concluded.