Helping the Poor amid Corona Outbreak 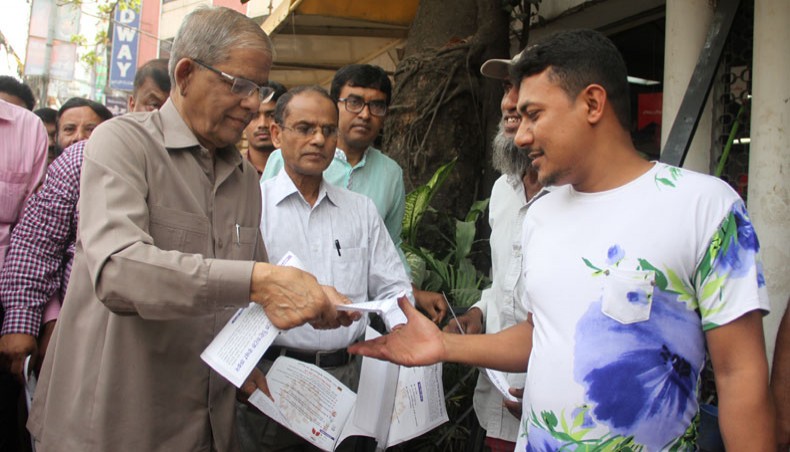 Political parties are supposed to stand by the people during any national crisis, but the opposition parties, including the Bangladesh Nationalist Party (BNP) and its allied Jatiya Oikya Front as well as the 20-party alliance have failed to come in aid of thousands of helpless people in this crisis time caused by the coronavirus outbreak in the country.

Instead of standing by the people, the opposition parties are blaming the measures of the Awami League-led government by raising one question after another over the treatment facilities for the patients ill with the deadly bug and other measures hoping to take political mileage.

Bangladesh has so far reported 20 deaths in the country while at least 218 patients were detected with the bug.

Ruling Awami League general secretary Obaidul Quader recently urged the BNP to stand by the people and stop attempts to make political gains in this time of crisis.

Amid fears of a major outbreak of the virus, the government extended the general leave to April 14, the first day of the Bengali new year known as Pohela Boishak.

The World Health Organisation has also suggested Bangladesh to go into a total lockdown and declare a state of emergency.

Death toll from the coronavirus or COVID-19 has climbed to 82195 globally while 14, 32,577 have been infected with the deadly virus till filing the report at 5:00pm.

The COVID-19, first reported in China’s Wuhan, has been spread to over 200 countries across the globe.

Talking to the daily sun, political analysts said the coronavirus is now a worldwide pandemic and it is affecting the entire world, including Bangladesh.

At a time like this, the opposition parties of the country should stand by the thousands of  helpless and destitute people of the country.

They should concentrate more in ensuring better services to the people so that the nation can overcome the crisis, they said.

Sources in the opposition parties said a number of leaders of different parties including the BNP are rich and many of their supporters are also big businessmen and industrialists.

But they are neither standing by the helpless and destitute people nor extending assistance for the treatment of the patients with the bug.

Asked about their stance during this coronavirus pandemic in the country, BNP senior joint secretary general Ruhul Kabir Rizvi told the daily sun on Wednesday “The ruling party leaders are telling lies. That’s why they do not see our activities.”

He claimed that the BNP, its front and associate organizations, including their professional bodies are standing by the country’s helpless and destitute people by providing food and necessary protective kits.

Insiders from different opposition parties including the BNP said actually the parties and its leaders are not much interested to spend money for the helpless people as they have been staying away from power for long.

Some candidates, who contested the last parliamentary polls and different local government units including upazila parishad, said they are not much interested to stand by the helpless people during this pandemic situation as they have been defeated in the election and do not see any hope.

“There are a number of rich leaders of BNP but now they are staying inside home and even not contacting with their poor leaders and activists across the country during this crisis situation thinking of spending money,” said a district level BNP leader.

Some opposition leaders from different districts and upazilas told this correspondent the the rich leaders of opposition parties including the BNP should help the poor along with their own helpless leaders and activists.

Reza Kibria, general secretary of Gono Forum, claimed that as per their capacity the party leaders are distributing foods and other necessary goods among the helpless people and different organizations across the country through maintaining social distance.

“If the ruling Awami League transfers power and handovers it to us, we will be able to manage the current situation better than the current government. If we get the power, we can take proper and timely decision to handle the current coronavirus situation of the country,” he added.

Talking to daily sun, Sharif Jamil, Buriganga Riverkeeper, environment activist and General Secretary of Bangladesh Poribesh Andolon (BAPA) said “Opposition parties should stand by the government to ensure proper support to all the helpless people of the country during this coronavirus crisis.”

Calling for forging a national consensus to tackle the coronavirus crisis, Jatiya Oikya Front, led by Dr Kamal Hossain, on Tuesday placed a five-point proposal to tackle the current crisis.