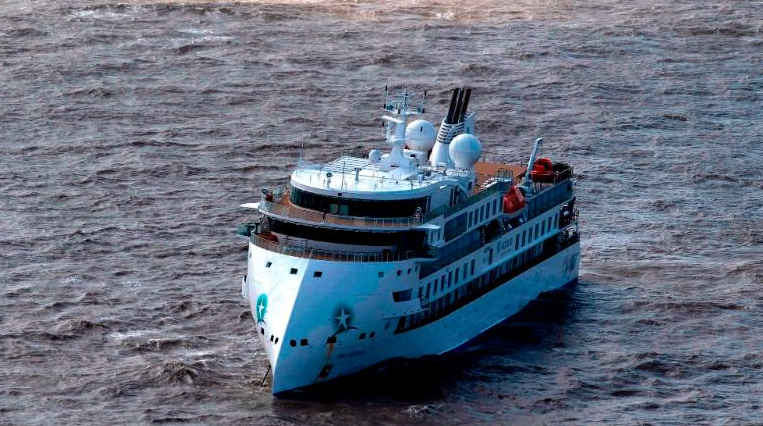 Australian and New Zealand passengers will be evacuated from a stricken Antarctic cruise ship Thursday, after almost 60% of those on board tested positive for the coronavirus.

The Greg Mortimer, a cruise liner operated by Australia's Aurora Expeditions, departed March 15 on a voyage to Antarctica and South Georgia. Since the beginning of April, however, the ship has been stuck off the coast of Uruguay, after authorities refused to allow passengers to disembark due to the risk of coronavirus.
Of the 217 people on board, 128 passengers and crew have now tested positive for the virus.
Six passengers requiring specialized care have been transferred to medical facilities in Montevideo -- a video posted online by the Uruguayan navy showed them being transferred from ship to ship wearing full protective gear.

Passengers from European and American who have tested positive for coronavirus, however, will have to remain on board until they have a negative test result, after which they may be able to depart via Brazil, Aurora said.

All passengers will be retested every two or three days, according to the company's website.
In a statement earlier this month, Aurora said that the ship's doctor had developed a fever, and "we are organizing a back-up volunteer medic." The cruise operator added it had "formally escalated our request" to the Uruguayan authorities to allow the ship to dock and passengers to disembark, but it had so far been denied.

Late Tuesday, the Uruguayan government said it had authorized a medical flight evacuation of New Zealand and Australian passengers aboard the Greg Mortimer for later this week. The passengers will fly to Melbourne on Thursday on a plane chartered by Aurora, where they will undergo a mandated 14-day quarantine before proceeding to their final destinations.

"We have been working on charters and flights for all onboard with the aim of disembarking our passengers as soon as possible," Aurora said in a statement.

"While our preferred plan had been to disembark all passengers simultaneously, the nature of the situation and the difficultly in securing flights has meant it is likely that the Australian and New Zealand passengers will leave the vessel before our European (UK included) and North American passengers."

Aurora said the chartered Airbus A340 will be specially fitted with medical and quarantine facilities in order to "ensure the health and safety of all on board." The company estimated the cost per passenger of at least $9,300, and said it was in discussions with the Australian government "for support with this cost as we know that it is not viable for many people."

Ian Duddy, the UK's ambassador to Uruguay, said on Twitter that "we remain in close contact with the Uruguayan government, the cruise operator (and) UK passengers on board the Greg Mortimer."
"Several passengers have tested positive for Covid-19. We continue to explore ways for passengers to disembark while respecting all health protocols," he added.

The Uruguayan government did not comment on when or whether passengers would be able to disembark this week.