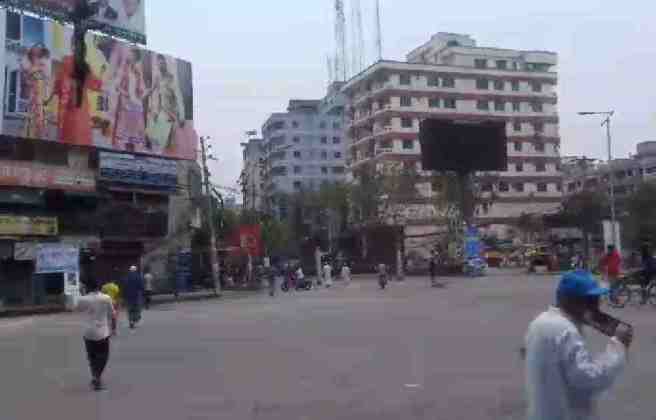 The port city of Narayanganj was virtually deserted as the local administration put the entire district under ‘lockdown’ from Wednesday morning in an effort to curb coronavirus.

The decision to lock down the district was taken on Tuesday as the Institute of Epidemiology, Disease Control and Research (IEDCR) has identified it as the hotspot of coronavirus transmission.

A few shops at kitchen markets in the city were seen open while others remained shut since Tuesday night, said Additional Superintendent of Narayanganj Police Mostafizur Rahman. “Everything remains shut as per the government order and we’re on a hard line over the issue,” he said.

However, emergency services like medical care and supply chain remained out of the purview of the restrictions.

Wishing anonymity, an official of a law enforcement agency said some areas in Sadar and Siddhirganj upazilas, including Fatullah, were found to be most vulnerable spots for coronavirus transmission.

On Tuesday night, an ISPR release said the entire district of Narayanganj would be put under complete lockdown from Wednesday and it would remain in force until further notice.

Civil administration, Armed Forces and other law enforcement agencies in coordination with local representatives would jointly work to this end, said the release.

Bangladesh on Tuesday reported 41 more coronavirus cases, including 15 from Narayanganj.