Majed hid in Kolkata for 23 yrs 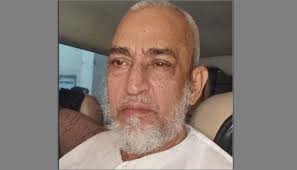 Captain Abdul Majed, one of six death-row convicts in the Bangabandhu murder case, hid in Kolkata of India for about 23 years.

The information came to know after Assistant Public Prosecutor Hemayet Uddin Khan talked to Majed during his appearance in a Dhaka court on Tuesday.

Majed, who reportedly arrived in Bangladesh on March 15, was arrested from Gabtoli area of Dhaka in the early morning of Tuesday.

Majed wearing white pyjama and pants was produced before the court around 12.15pm. He was handcuffed with a bulletproof police jacket and a helmet.

Hemayet said Majed claimed he was hiding in Kolkata for about 23 years. He arrived in Dhaka on March 15 from Kolkata.

The convict said one of his sons was living in the United States. The self-declared killer claimed that he was not involved in killing Bangabandhu Sheikh Mujibur Rahman.

When the prosecutor asked Majed about his self-declaration after the brutal murder, he kept mum.

No lawyer appeared to defend Majed when Sub-Inspector Anisur Rahman prayed for his detention in jail as he was shown arrested in the Bangabandhu murder case.

Dhaka Chief Metropolitan Magistrate AM Zulfikar Hayat passed the order when the Counter Terrorism and Transnational Crime (CTTC) unit produced him before the court amid tight security.

Earlier, a team from CTTC unit of police arrested Majed from Gabtoli area at about 3:45am on Tuesday.