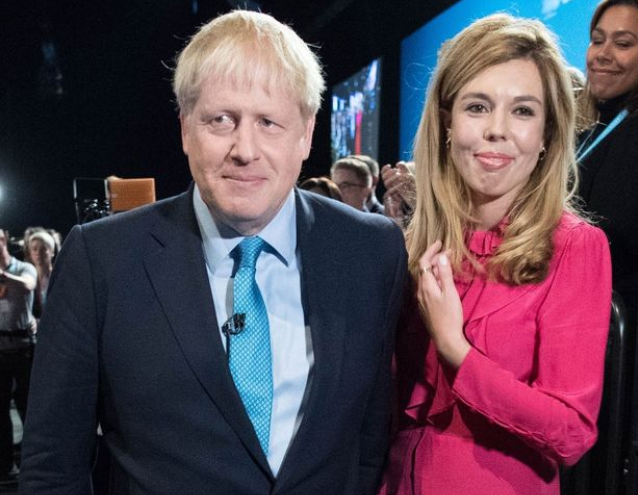 Boris Johnson's fiancée Carrie Symonds is facing the agony of being unable to be by the Prime Minister's side while he is in intensive care.

Ms Symonds, who is around six months pregnant, is reported to be self-isolating with the couple's dog just miles from his hospital ward in London after suffering with coronavirus symptoms herself.

The 32-year-old has been apart from Mr Johnson for around two weeks following his coronavirus Covid-19 diagnosis.

But what started as a "dry cough" and "mild symptoms" for the PM, 55, has now taken a very serious turn with Downing Street tonight confirming he is in the intensive care unit at St Thomas' hospital in Westminster.

"I haven’t needed to be tested and, after seven days of rest, I feel stronger and I’m on the mend."

Ms Symonds, a former government adviser, was met with an outpouring of well-wishes.

The mum-to-be - who usually lives with the Prime Minister in the No 11 flat - also previously shared a photograph of herself self-isolating in Camberwell, south London, with the couple’s dog Dilyn.

It is believed she may now be at her mother's home in East Sheen, South West London, but this is unclear.
Ms Symonds and Mr Johnson announced in February that they were engaged and were expecting a baby.

The pair met while working together in 2010, when Ms Symonds campaigned for her future partner in the 2010 London Conservative Party mayoral selection after being hired by the party as a press officer in 2009.

Rumours of a relationship between the pair began on Valentine's Day 2018. Then, in March that year the politician attended her 30th birthday party.

In March 2019, Ms Symonds shared images of the two on holiday in Italy on her social media.

Rishi Sunak, Chancellor of the Exchequer, tonight tweeted: "My thoughts tonight are with Boris Johnson and Carrie Symonds. I know he'll be getting the best care."

And business minister Nadhim Zahawi tweeted: "Thoughts & prayers for @BorisJohnson & @carriesymonds and their family. I have known Boris for 20 years he is a fighter and will beat this virus."