Bangladesh’s law enforcers on the frontline of corona battle 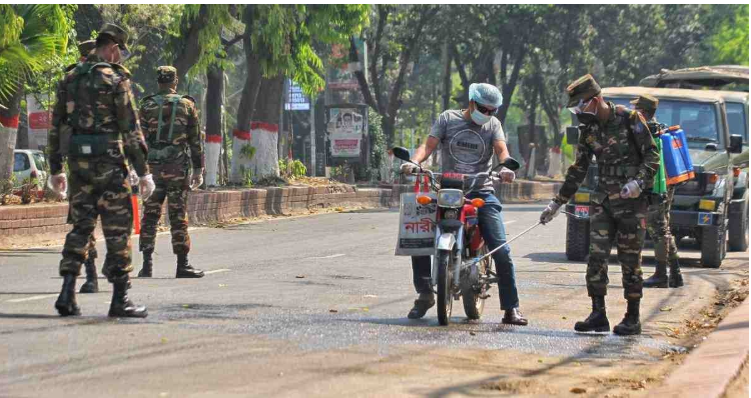 Police and Armed Forces members, the government’s frontline staff, are playing a proactive role in convincing people about government directives to maintain social distancing as well as home-quarantine by overseas returnees in a bid to curb the deadly coronavirus, apart from maintaining the law and order.

The government announced general holidays from March 26 until April 4 in the first phase and later extended that until March 11 asking people to stay at home and maintain social distancing and overseas returnees to be there in compulsory 14-day home-quarantine to check the coronavirus spread as Bangladesh is a densely-populated country.

Sources at the Police Headquarters said over 2 lakh members of Bangladesh Police have been working relentlessly from the very beginning as per the government’s directives to tackle the situation.
On March 23, the government decided to deploy members of the Armed Forces in aid to civil power across the country and they started their activities on March 25.

Assistant Inspector General (AIG-Media) of the Police Headquarters Md Sohel Rana said all the units of Bangladesh Police are working together to prevent the spread of the coronavirus. “They’re efficiently carrying out directives that the government gives from time to time.”

He said police personnel are making door-to-door visits to find out overseas returnees and keep them in home-quarantine apart from ensuring that people maintain social distancing.
As many were reluctant about complying with the directives to maintain social distancing, Army members started going tough from Thursday against those violating the directives.

They are also spraying disinfectant in different areas alongside creating awareness among people about coronavirus, he said.

Zaid said Navy members are discharging the same duties in coastal upazilas.
Nine naval ships are involved in alerting fishermen, who are fishing by small and large trawlers in the sea and rivers of coastal areas, about maintaining social distancing, he said, adding that they are also giving advice and guidance about the awareness issue among their (fishermen) families.

Masks and soaps are being provided by Navy members among fishermen to ensure their safety, the ISPR director said.

Besides, various relief materials, including rice and pulses, are being provided among the poor and destitute to help them cope with the situation, he said.

Wishing anonymity, another ISPR officer said strict legal action is being taken against those who are violating the government directives.
Bangladesh on Monday confirmed the death of three more people from the coronavirus, taking the death toll from the Covid-12 disease in the country to eight.

Six more people with corona infection have been identified. So far, 123 people have been infected in Bangladesh, 35 in the last 24 hours alone.