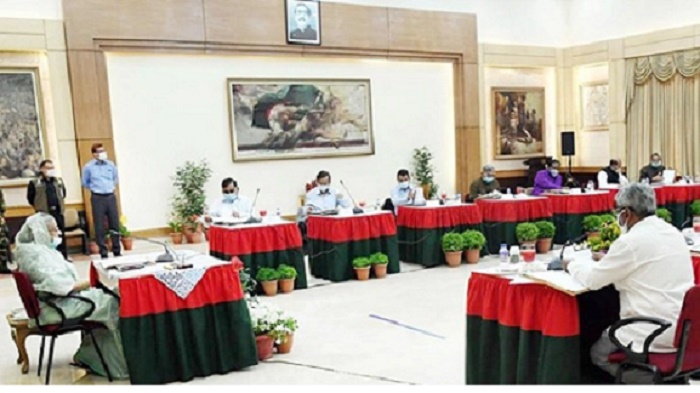 Prime Minister Sheikh Hasina has directed the authorities concerned to shut down the vulnerable areas of the country to check the spread of the coronavirus pandemic.

“The prime minister asked the authorities concerned to shut down those areas which have corona patients,” said a source quoting the premier as saying during an unscheduled discussion at the cabinet meeting.

Sheikh Hasina presided over the meeting at her official residence Ganabhaban in the capital on Monday.

Amid fears of the coronavirus outbreak, the government has extended the general holiday until April 14.

The World Health Organisation has suggested that Bangladesh should go into lockdown and declare an emergency due to the outbreak of the deadly disease.

Bangladesh has so far reported 12 deaths from coronavirus with at least 123 more infected with the disease.

The global death toll from coronavirus has climbed to 69,514 with 1276,302 more infected with the deadly virus so far.

The Covid-19, which was first reported in China’s Wuhan, has been spread to over 200 countries across the world.

Different parts of Bangladesh have already gone into lockdown to check the coronavirus spread.

Amid the rise of coronavirus cases, the government has also banned entry of foreign nationals through the land ports of the country until further notice.

The premier also asked the home ministry to prepare a guideline to release those prisoners who had been serving jail term for a long period.

Prisoners for killing, raping and throwing acid will be out of such facility.

Home Minister Asaduzzaman Khan Kamal told reporters that the cabinet discussed for finding out a mechanism to release those prisoners who had been serving jail term for long.

“We have been working in this regard,” he said.

Asked whether the cabinet takes any new decision regarding the coronavirus pandemic, he said, “Areas, which have infected patients, are being locked.”

Meeting sources also said that the cabinet decided to shut all factories down at the Export Processing Zone.

The Cabinet also directed the administration and law enforcement agencies to implement the government directives on social distancing in a stricter manner to prevent the spread of coronavirus in the country.

“Law enforcement agencies and the administration have been directed to take measures for stricter implementation of the directives to maintain social distancing. They have also been asked to simultaneously conduct massive campaign in rural areas,” Cabinet Secretary Khandker Anwarul Islam told reporters at a briefing after the meeting.

Anwarul said since the coronavirus situation worsened to some extent in the country, it would in no way be possible to keep the situation under control without the wholehearted support from people.

“So, the Cabinet has repeatedly urged people to maintain social distancing and quarantine. Or else, it’ll in no way be possible to control it,” he added.

He said no devotee from distance should go to mosques to say prayers.

“Imams and Moazzins as well as several nearby persons are there who can go to mosques,” he further said.

About readymade garment (RMG) factories, the Cabinet secretary said a unified action plan would be taken in this regard following a meeting presided over by PM’s Principal Secretary being held at the Prime Minister’s Office on Monday afternoon.