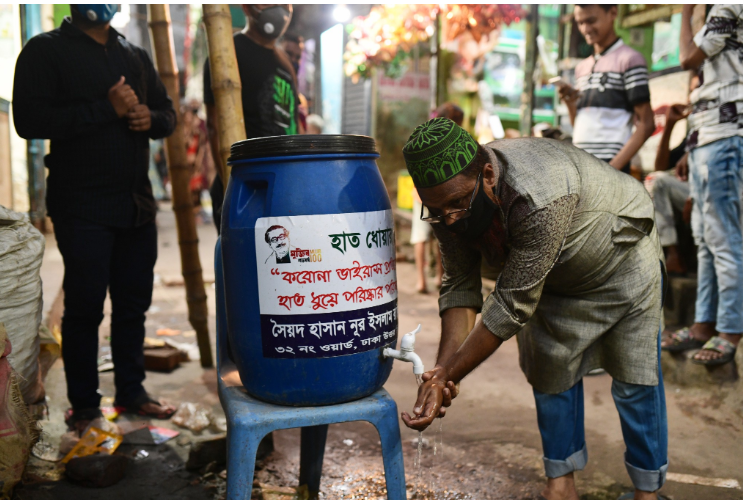 As the Institute of Epidemiology, Disease Control and Research, or IEDCR, announced the biggest daily spike in infected cases of COVID-19 in the country so far on Sunday, the break-up of the 88 cases identified so far revealed two potential hotspots  in capital Dhaka - Tolerbagh, a locale within the sprawl of Mirpur in the city’s north-west, and Basabo in the south-east.

Based on the number of cases (9 in Basabo, 6 in Tolerbagh), they were named as part of 4 ‘prone’ locations in Dhaka city. One location that does not seem to worry the authorities, but that bothers experts as well as Dhakaites, is the ‘Geneva Camp’ of Urdu-speakers in Mohammadpur.

One of 70 such clusters (they were maintained as refugee camps by the UN under the Geneva Convention) all over Bangladesh housing the ‘stranded Pakistanis’ since 1971, the one in Mohammadpur is the largest. Most of the inhabitants are Muslims who had migrated from the Indian state of Bihar as the Subcontinent was partitioned along communal lines in 1947, or their descendants. When the map changed again, Pakistan long promised but ultimately failed to repatriate them.

One of the most densely-populated parts of the most sparsely-populated city in the world, almost none of the economic growth or development witnessed in the country over the last 10 or even 20 years visited the ‘Bihari camp’, as it is also known.

Now the ghettoised population that confronts grinding poverty on a daily basis is faced with a potential health crisis, as they are hardly in any position to observe the guidelines of ‘social distancing’ asked of them to fight an invisible enemy.

“More than 40,000 people under approximately 5,000 families are living in between 12.5 Bigha (179,685 sq ft) areas in this camp. Each goli (narrow lane) is approximately 7-8 feet wide and 130 feet long. Each family consists of 8-9 members - so maintaining adequate social distancing is a tough call for the dwellers in this unfortunate land,” Washi Alam Bashir, President of Mohajir Rehabilitation & Development Movement (MRDM) at the Geneva Camp, told journalists
However, this was not the usual scenario when the UNB journalists visited the street, which was occupied by mostly the insiders of the camp -- not by the outsiders, as Dhaka remains in lockdown under the watch of the authorities.

The crowd contained mostly the men who work mostly as barbers, carpenters, mechanics and garage hands, butchers, drivers and rickshaw pullers, shopkeepers, casual and construction labourers on hire in different parts of the city. Amid the lockdown, they are barred from work, thus they were spending their idle time in the streets.

Besides, two mosques located in the camp usually occupied with the moderate crowd in normal days as almost everyone is Muslim in the community. Interestingly, the crowd in these two mosques seemed higher than the usual despite the Islamic Foundation and Islamic scholars clearly urged everyone to pray at homes and avoid mass gatherings at the mosques..
In order to observe the regularities in Geneva Camp during the countrywide lockdown period, a UNB team visited the camp and noticed the presence of significant gatherings of people on the streets inside the camp, where several shops were open. Although on the main roads leading in where some of the best kebab shops in the city are located, such as Mustakim kebab, Muslim kebab etc. -- shops were closed.

The narrow-lane based camp is usually occupied by a large number of dwellers coming from different parts of Dhaka in regular days, as foodies often come to get indulged the flavorful Mughal foods like kebab and biriyani -- while many cloth-traders come to place orders of ‘benarasi’ and ‘karchupi’ works on clothes, as the Biharis are famous for their excellence in handloom crafts. The hand-looming can be seen in almost every house as they run small-scale, home-based industries.

eople are going to mosques helplessly. Not only because of the fear of this crucial time to seek mercy and blessings from the almighty, but, well, for somewhat a social reason that should be noted,” Bashir told journalists.

“These men are not used to staying at home all day long. They work hard throughout the day in different parts of the city and come home at midnight only to sleep. Most of the families having a significant amount of men, women and children living together and women need their spaces which they are usually familiar with during the normal days – but at this point, the jobless men have no other option but to keep themselves out of home in this scorching heat, thus they are occupying the streets and the mosques, the latter of which seems better to the Muslim majority,” Bashir explained..