Fishermen ‘beat a dolphin to death’ in Cox’s Bazar 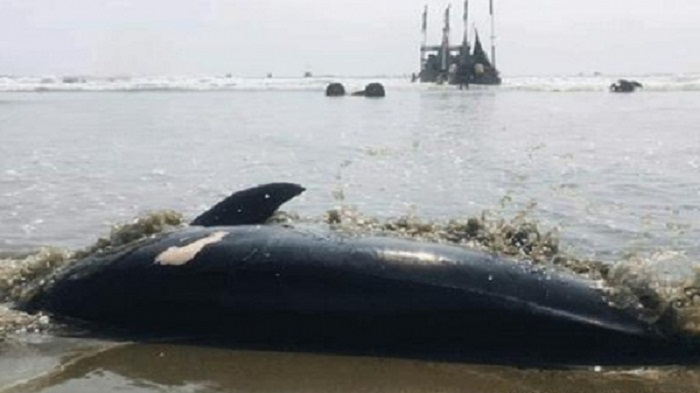 Fishermen in Cox’s Bazar allegedly killed a dolphin on Saturday after it was trapped in the fishing net. The killing of the dolphin was taken place on Shaplapur seashore in Teknaf of Cox’s Bazar.

A local youth Jalal Uddin Chowdhury shared a picture of that dead dolphin on his Facebook wall on Saturday.

Jalal Uddin told reporters that fishermen dumped the dolphin on the seashore after it was caught in the net. The dolphin was very large, it bored sign of injuries on its body, he added.

Meanwhile, local environmentalist Moazzem Hossain Riyad, Chairman of Save the Nature of Bangladesh claimed that fishermen beat the dolphin to death after it was trapped in their net.

Riyad also supposed that a syndicate of fishermen took the flesh and bones of the dolphin for making various topical drugs.

He also said that the killings of marine animals were increasing due to lack of justice.

Regarding this matter, Cox's Bazar Divisional Forest Officer (DFO) Humayun Kabir told reporters that he was aware of such incident. They were looking into the matter. If the incident found authentic, action will be taken according to the Wildlife Protection Act against the fishermen.

Meanwhile, Shaplapur bit officer Manjurul Alam Chowdhury claimed that the dead dolphin floated to the shore. The dolphin had no chance to be trapped in fishing nets as fishermen did not went to the sea since several days.