Multinational cos not responsive to “war” on corona 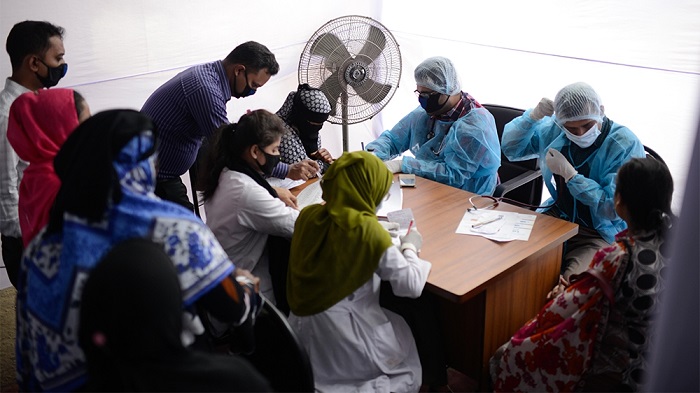 Multinational companies and many top business groups are yet to stand by the government despite its hard struggle in ensuring food supply to the low-income groups and checking and checking the spread of deadly coronavirus.

Amid fears of an outbreak of the virus, the government extended the general leave to April 9 along with the two weekly holidays on April 10 and April 11.

As part of the measures, her government is set to feed day workers and peasants as they were already hard-hit due to the effects of the coronavirus with all kinds of labour-incentive development works and businesses shut.

The prime minister, like in all other national crises, took a number of immediate measures to keep the economic activities running.

The “war” required support from all quarters as huge funds are needed to built to fight coronavirus-related treatment and food aid for the poor.

Many top business groups, including the Bashundhara Group, have already extended support to the government by donating funds to the Prime Minister’s Relief Fund.

However, money-makers telcos like Grameen, Robi, Airtel and Banglalink are yet to come forward, besides other large multinationals doing brisk business in Bangladesh.

Experts are of the opinion that multinational companies and other top business units should also follow suit to strengthen government efforts and make those a success.

Mentioning names of several companies, former central Bangladesh Bank Governor Professor Atiur Rahman said Bashundhara Group and some other major companies have already shown their empathy in the face of the crisis, while the mega electronic firm, Walton, announced a special survival fund for their own staff.

“Keeping humans alive should be the first consideration for the CSR support. First life, then economy,” he told the daily sun.

Prof Atiur Rahman said that the ongoing pandemic covid-19 is still unfolding as it is quite uncertain how long and intense will be this deadly invisible enemy’s onslaught.

“The government is doing its best. But the society at large including the large corporations and financial institutions must come forward with focused corporate social responsibility activities to save the vulnerable. Both formal and informal sectors have been hit hard by this health disaster,” he said.

The famed economist further mentioned that the service sector had been simply devastated with massive job-loss and the small businesses and their employees are helpless now.

Prof Atiur recommended that the corporations and financial institutions can take the help of NGOs working in urban areas to distribute food and medical support.

“Alternatively, they can get cash support through mobile financial services. The companies can do the best CSR by keeping their workers on pay rolls for at least three months, even if they are not showing up for work due to social distancing protocols,” he said adding that the small self-employed people also needed CSR support.

The Bangladesh Bank started disaster management and institutional CSR support with Tk 100 million, while the amount can be increased many folds to face this exceptional human disaster.

Bangladesh has so far reported eight deaths in the country while at least 70 patients were detected with the bug.

The death toll from the coronavirus or COVID-19 has climbed to 58,929 globally while 1,100,283 have been infected with the deadly virus till filing the report at 5:00pm.

The COVID-19, first reported in China’s Wuhan, has been spread to nearly 200 countries across the globe.

The World Health Organisation has also suggested Bangladesh to go into lockdown and declare emergency due to the outbreak.

Telecommunications Minister Mustafa Jabbar said the local and multinational companies in telecommunication sector are ready to provide assistance under the CSR programme.

“Officials of mobile operators and handset manufacturers have talked to me. They are chalking out plans to provide support to the corona virus-hit people. I have asked them to accommodate all the CSR funds,” he said.