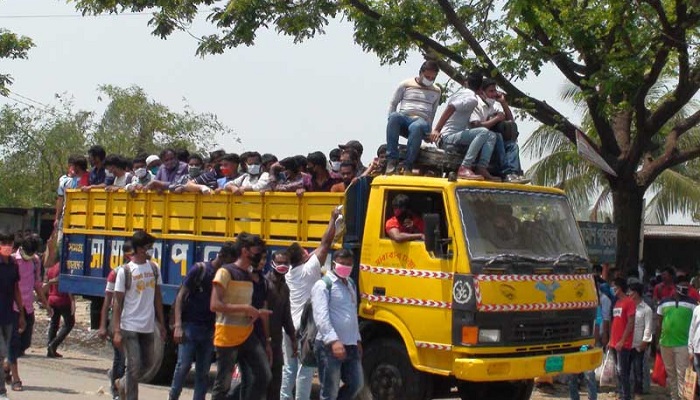 Ignoring nationwide ongoing shutdown enforced to prevent the transmission of coronavirus, thousands of people on Saturday were seen returning to Dhaka from different parts of the country.

According to media reports, since Saturday morning, low-income people mostly garments workers from 21 districts of the South-Western region of the country had been arrived at the Paturia ghat in Manikganj crossing the Padma river by ferry.

Many of them were seen traveling on crowded trucks and pick-up vans, while some opted to travel on foot, as the ongoing suspension of public transports was extended till April 11.

They were traveling in flocks, ignoring the guidelines of physical-distancing, our correspondent reports.

People were seen coming to the capital braving all physical sufferings and the exploitations of goods-laden vehicles and other short-rout transportations like rickshaw-van. They have to pay Tk 100 for traveling 10 kilometers.

Quoting the local returnees, our correspondent reported the RMG workers were returning to Dhaka risking their life as the factories of readymade garments in the capital and in the surrounding areas will be opened from Sunday (April 5).

The government declared general holidays across the country from March 26 to prevent the spread of coronavirus. Most of the garment factories temporarily shut their operations until April 4 in line with the holidays.

The holidays promoted most of the garment workers to rush to their villages.

Many workers said they might lose their jobs if they fail to report to work on Sunday, forcing them to return to Dhaka ignoring the panic and fear caused by the COVID-19 pandemic. 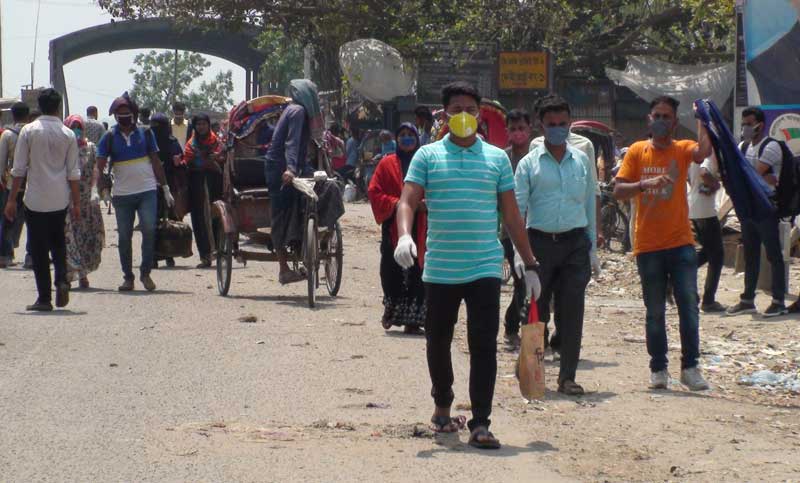 Sumon, who works in a garment factory in Ashulia, said: “Our factory opens tomorrow. I am traveling from Saidpur on foot and by various transports.”

“The government has imposed an unannounced lockdown. But on the other hand, the factory owners will keep the factories open. Where will we go? I will lose my job if I can’t join work tomorrow. The fear of losing the job is bigger than the fear of getting coronavirus,” he said.

Aklima, another apparel worker, said: “I came from home with a lot of trouble by walking and riding rickshaw as our factory opens tomorrow. But a few minutes ago, my landlord called me and told not to come. Where do I go now?”

Law enforcers were struggling to handle those travelers.

Ashulia police inspector (investigation) Jabed Masud said “That if the factory is open, the workers will have to go. Our instruction is to be aware of ensuring social distance. That's what we're doing.”

Workers gathered at the ferry ghat and on the highway to come to Dhaka. Many were seen riding on trucks and pick-up vans without maintaining the distancing rules.

On Barishal-Dhaka highway, thousands were seen travelling by trucks and small pick-ups.

They could not maintain adequate distance from each other due to high number of passengers and lack of vehicles, reports our Barishal correspondent.

In Gazipur at Maona intersection on Dhaka-Mymensingh highway, hundreds of people were seen waiting for vehicles, reports our Gazipur correspondent.

Many, upon not being able to avail any transportation, started their journey to Dhaka on foot.

President of Bangladesh Garment Workers Solidarity Taslima Akhter said “first of all, I want to say that there are two rules in the same country. Where government officials are in the house and the garment workers go to the factory. This is an injustice to the workers.”

The government announced a 10-day shutdown of public transport services, offices and workplaces on March 26, and extended it to April 9 to stem the outbreak. Educational institutions are also closed.

The government and the owners’ associations have advised the garment and knitwear factories to continue production with proper protection of the workers from the virus if they have orders to deliver.

The government has also announced a Tk 50 billion relief package for the exporting industries. The owners will be able to use the funds only to pay the workers even if the factories remain closed due to the global economic turbulence caused by the pandemic.