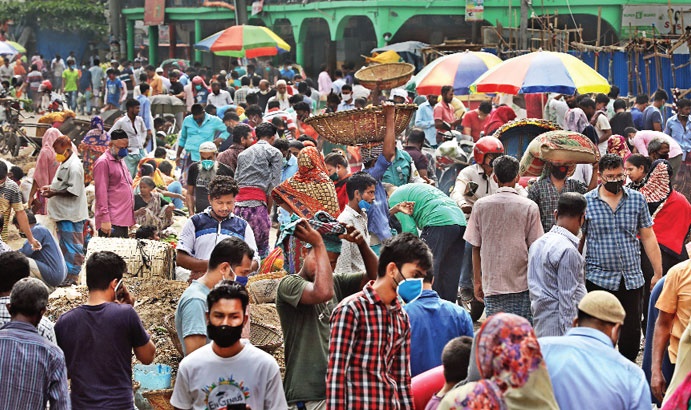 Members of the law enforcing agencies and army are on hard line in the capital and elsewhere in the country to ensure social distancing for containing further spread of coronavirus.

As part of their move, they are intercepting people and vehicles on roads and highways.

While conducting the courts, its magistrates fined 61 people and institutions Tk44,600 and filed 53 cases for roaming the streets without any reasons, said district administration officials.

Pabna Sadar Upazila Nirbahi Officer (UNO) Joynal Abedin said they have been conducting drives to prevent people from coming out of houses without valid causes during the general holidays to prevent the spread of coronavirus.

In Khagrachhari, local administration fined 37 people in the district for roaming around the streets without any reason.

Members of Bangladesh Army have been patrolling the main roads for maintaining social distancing.

Meanwhile, the government on Wednesday extended holidays till 11 April. Earlier, a general 10-day holiday was declared from 26 March to 4 April.

Due to strict action by the law enforcers and army men, most of the city-roads and thoroughfares were almost deserted on Friday as movement of all kinds of vehicles and pedestrians virtually came to a halt.

Like the previous day, the capital on Friday also wore a deserted look as traffic movement was very thin on most of the streets, lane and by-lane after law enforcers and army personnel went for hard line against the traffic.

Only a few number of rickshaws were seen plying different city-street with a nominal number of passengers.

Being panicked by the coronavirus outbreak, many people, mostly students of different schools, colleges and universities, have left the capital.

Amid growing concern over the novel coronavirus infection, a large number of people, mostly students, small traders and other private companies started leaving Dhaka for the last few days after the government had closed all educational institutions from March 17 to 31.

People working in transportation services such as buses, CNG auto rickshaws and ride-sharing services say that the number of passengers has decreased to a bottom level in the capital.

Although the authorities concerned, including the ministries of education and health, asked students to stay inside homes during the holiday period and urged the guardians to ensure it, most guardians are not complying with the warning.

Amidst a government-enforced soft shutdown, the poor and underprivileged are suffering most in absence of work.

Police and authorities must be informed in advance before providing any kind of relief material and services.

Md Sohel Rana, assistant inspector general (AIG-media) of Police Headquarters, on Thursday, said that in the current Covid-19 situation, many are standing beside the general people with necessary services and help. Many service organizations are also helping them.

In many cases, people are engaging and gathering while distributing food and services.

Due to this, the directive of social distancing is not being followed properly, which is extremely risky in the present context, he furthered.

Therefore, the police and authorities must be informed in advance with respect to providing any necessary assistance, he further said.

The government since March 26 has enforced a soft shutdown to enforce social distancing and prevent a further spread of the novel coronavirus, by restricting all types of movement across the country.

The Public Administration Minister had issued a gazette on Wednesday, announcing the government’s decision to extend the public holiday, which was supposed to end on April 4, until April 11.

The gazette noted that the shutdown order would not apply to emergency services, including electricity, water, gas, fire services, cleaning activities, telephone and internet. The ministry on Thursday also included newspapers and fuel in this category.

Amidst the shutdown, the poor and underprivileged of the city are suffering most, in absence of work.

Many organizations, both public and private, however, have come forward to help them with relief materials and food.