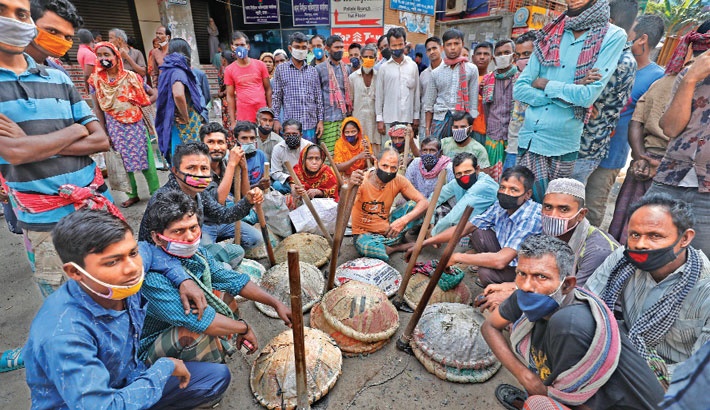 The general holiday over coronavirus has put construction and transport workers in dire straits as their livelihood is at stake.

They are seen sitting idle at different places in the capital in the hope of getting assistance from the government and the well-off section of the society.

The government holiday started on March 26 and is expected to end on April 11.

The day labourers , construction and transport workers are going through a tough time.

Likewise those working in shops in barbershops worker, domestic help, floating hawkers, small shop ownets and rickshaw pullers been out of work for a week

The new coronavirus is potentially disastrous for low-wage workers, who live from day to day. The street vendors who sell sliced fruits, peanuts, phuchkas, puffed rice, juice, sugarcane and tea are the worst hit.

A total of around 3.7 million workers across the country, including the capital city, are engaged in construction related works, according to Bangladesh Institute of Labour Studies (BILS). Arif Molla, a construction worker at MIrpur-11 said they run their family by the daily income but they have earned a penny since last week. He said they have no savings as they worked with a lower wage for this they are facing dire state.

Mokhlesur Rahman, Organizing Secretary of Bangladesh Road Transport Workers’ Federation, told daily sun that around 70 lakh transport workers are engaged in the transport sector, who get paid on a daily basis, are passing their days in hardship because of the ban on the movement of all kinds of public transports from March 26.

All of the transport workers have no work and earning since the last week, he said adding that they are demanding food rations and special allocations for the workers.

Customer follow have declined sharply in the country’s salon and beauty parlor since the first coronavirus patient have found in Bangladesh on March 8, said Al- Ahsan president of Association of Beauty Salon Owners (ABSO) He said most of the people works on the sector are daily earners, so, the shut down affected them mostly.

There are around 2 lakh beauty parlors and 7-10 lakh saloon and barber shop in the country while around 45-50 lakh people are engage with this sector, he said.

Some beauty parlour workers also work in home service, he said adding that all of them are now sitting idle and facing uncertainty.

On the other owner of the beauty parlor also in trouble as they have to pay rent to the landlord though there shop was closed during the time, he said.

Since the outbreak of coronavirus many of their customers have stopped coming since March 8, leaving small business owners and employees worried about how they will make a living, said Al- Ahsan who also owner of Total Beauty parlor at Eastern Mollika shopping mall at Elephant road in the capital.

They have to wait for food aid near roadside as the prices of essential foods remained high in market in the wake of coronavirus crisis, said Roich Uddin, a day labor seating beside road at Mohammadpur Krishimarket.

Sultan, a puchka traders was seat idle infront of Tokyo Square at Mohammadpur said he earned around Tk 1000 per day from his mobile shop and give Tk 200 to a part-time worker while his younger son also assist him.

He runs his four member family with the earnings, but, since the holiday start his shop was closed and he has no income.

“We depend on our everyday sales. Our families depend on our incomes. We can’t afford to stop working for a single day,” added he.

He said, “Though I am getting food for my family but how would I give house rent as I have no work since the last week.”  Zihad Hossain, a rickshaw puller said his daily earnings began to take a big hit since all educational institutions were declared closed by March 17.

“I have never faced this type of situation, I earned only Tk 200 on Wednesday while I earned Tk 800 per day in regular time,” he said.

They urged  the government to provide them financial support and cash supplement.

The urban informal sector people don’t know how to cope with this situation as the government doesn’t have proper safety net for them.