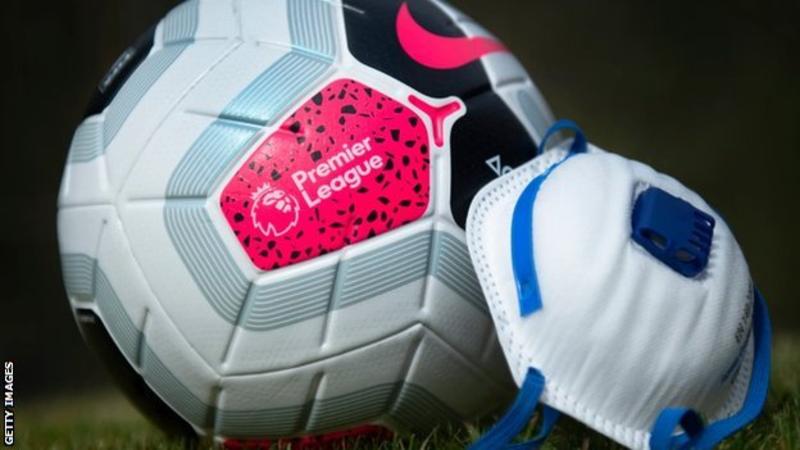 Premier League clubs will ask players to take a 30% pay cut in order to protect jobs as it was announced the season will not resume until "it is safe and appropriate to do so".

All clubs have agreed to put the proposed "combination of conditional reductions and deferrals" to players.

The Premier League will advance £125m to the EFL and National League, and give £20m towards the NHS.

Clubs still intend on completing all league and cup fixtures.

The EFL, Women's Super League and Women's Championship have all suspended play without setting a target return date, meaning the entirety of English football is on hold indefinitely.

"It was acknowledged that the Premier League will not resume at the beginning of May - and that the 2019-20 season will only return when it is safe and appropriate to do so," a Premier League statement said.

"Any return to play will only be with the full support of government and when medical guidance allows."

What are Premier League and English football's options amid coronavirus?
Hearts: No player asked to take more than 30% cut - Ann Budge
Players had faced scrutiny, notably from health secretary Matt Hancock, to take a cut in wages and "play their part" in offering support during the coronavirus pandemic.

Some clubs had furloughed non-playing staff as a result of the shutdown of the sport.

Before the Premier League statement was released, club captains - led by Liverpool skipper Jordan Henderson - held discussions over the creation of a charitable fund which could benefit the NHS.

The Professional Footballers' Association (PFA) has previously written to its members urging them not to agree any reduction or deferral in wages until they have spoken to the union.

After a meeting of clubs on Friday, the Premier League proposed a cut in wages in order to "protect employment throughout the professional game".

"This guidance will be kept under constant review as circumstances change," the Premier League said. "The league will be in regular contact with the PFA and the union will join a meeting which will be held tomorrow (Saturday) between the league, players and club representatives."

Crystal Palace winger Andros Townsend had spoken of his frustration with Hancock "deflecting blame on to footballers", stating players were an "easy target" and often supported charities.

The Premier League said it was aware of "severe difficulties" throughout the football pyramid and with clubs unable to play fixtures, moved to help "immediately deal with the impact of falling cash flow" at EFL and National League clubs.

Julian Knight, chair of the government's Digital, Culture, Media and Sport committee, welcomed the financial help for smaller clubs but said as the wage cut had not yet been agreed by players, the situation was "not much further along".

Knight had previously said clubs that furlough non-playing staff without imposing cuts on player wages should be subjected to a windfall tax if they do not change their approach by Tuesday.

Sports Minister Nigel Huddleston said: "It is absolutely right that a reduction of players' wages is on the table when there are lower-paid staff at some clubs being furloughed.

"The football authorities must all be aware of the strength of public feeling on this and I expect them to show leadership on the matter.

"It is important that the Premier League helps the national effort in response to the coronavirus pandemic and I will continue to work closely with the football authorities."

The league's statement also expressed "huge appreciation for the heroic efforts of NHS staff and all other key workers who are carrying out critical jobs in such difficult circumstances" with £20m immediately committed "to support the NHS, communities, families and vulnerable groups during the Covid-19 pandemic".