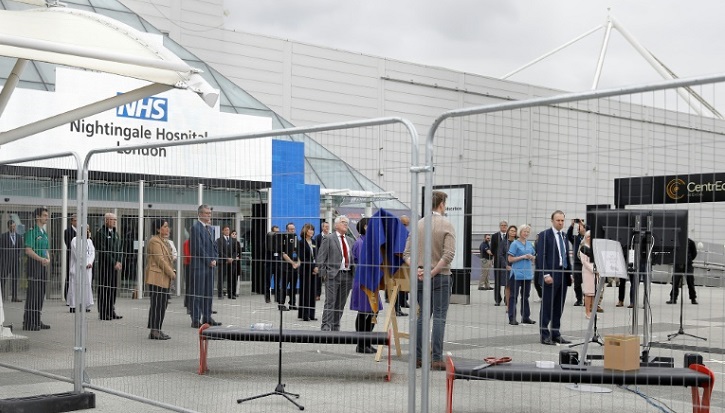 Britain on Friday opened a new 4,000-bed temporary hospital to treat the most seriously ill coronavirus patients, as day-on-day deaths surged to a new record and royal officials said Queen Elizabeth II would make a rare crisis address to the nation.

Charles, 71, officially launched the facility via videolink from Scotland, where he has been in self-isolation after testing positive for COVID-19.

Prime Minister Boris Johnson, who has also tested positive, said he would remain at home in quarantine because he still had a temperature.

Charles and Johnson are among 38,168 confirmed coronavirus cases across Britain. Numbers increased by 4,450 in the 24 hours to 0800 GMT on Friday, according to the health ministry.

There was also a third consecutive day of record increases in deaths of confirmed hospital cases -- 684 -- taking the overall toll to 3,605 as of 1600 GMT on Thursday.

At least one NHS nurse was among the fatalities.

The announcement of the new figures coincided with news the queen would make a rare special broadcast to Britain and the Commonwealth at 1900 GMT on Sunday.

She has been with her 98-year-old husband Prince Philip at Windsor, west of London, since March 19 as a precaution but palace officials have said the couple were in "good health".

The NHS Nightingale Hospital is named after the trailblazing 19th-century nurse Florence Nightingale, who is seen as one of the founders of modern nursing.

Charles paid tribute to everyone involved its construction, calling it "quite frankly incredible" to have transformed the giant exhibition centre into a critical care facility so quickly.

"I was one of the lucky ones to have COVID-19 relatively mildly," he said. "But for some, it will be a much harder journey.

"I am therefore so relieved that everyone can now have the reassurance that they will receive all the necessary technical care they may need, and every chance to return to a normal life.

"In this dark time, this place will place will be a shining light," he said, but added that he hoped it would not required for long.

The hospital will initially take 500 people in the coming days, said Health Secretary Matt Hancock, who has also tested positive for COVID-19.

It will take intensive care patients with COVID-19 from other London hospitals, which have seen the highest numbers of cases across Britain.

The new facility -- one of six being set up around the country -- is the size of 10 district general hospitals, and has more than 80 wards, each containing 42 beds.

When fully operational it will require more than 16,000 staff to run it.

Hancock praised the NHS, a taxpayer-funded service free at the point of use.

"In these troubled times, with this invisible killer stalking the whole world, the fact that in this country we have the NHS is even more valuable than before," he said.

NHS England chief executive Simon Stevens said he hoped the extra sites would not be needed.

"That will partly depend on continuing public support for measures to reduce growth in the infection rate by staying at home to save lives," he said in a statement.

Britons have been told to stay at home wherever possible and non-essential shops and services have been shut since March 23, as part a nationwide lockdown designed to stem the spread of coronavirus.

However, health officials say the measures will take time to have an effect.