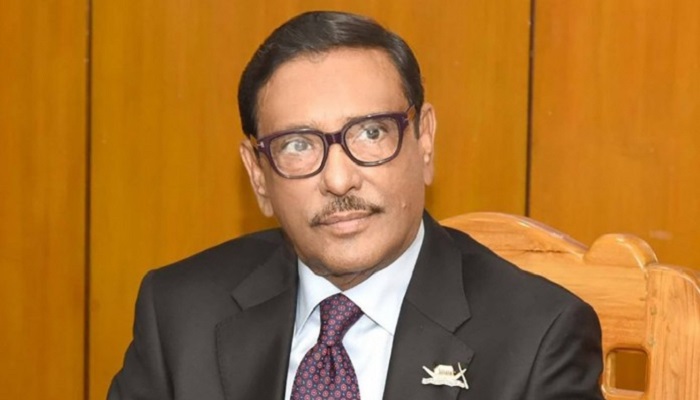 Awami League General Secretary Obaidul Quader on Friday urged the AL leaders and workers to stay alert so that none can mislead people by creating rumours over the COVID-19.

He came up with the call through a video message sent from his Sangsad Bhaban’s government residence .

“A vested quarter is trying to mislead people by creating rumours in the country’s crisis movement. The AL leaders and workers should always remain alert and awareness progremmes must be taken to prevent rumours,” he said.

Quader, also the Road Transport and Bridges Minister, urged people not to be confused over propaganda, saying that the vested quarter is out to mislead the country’s people by conducting propaganda using Facebook.

He also called upon the country’s people and the AL leaders and workers to follow the 31-point instruction of Prime Minister Sheikh Hasina to prevent the deadly coronavirus.

As per the instructions of the prime minister, the administration, army, the AL men and people from all strata have already come forward to this end, the AL general secretary said.

He said the doctors and nurses have been performing their responsibilities properly. “Do not show negligence in performing your duty,” he asked the medical staff and doctors.

Mentioning that the lower-income people have been suffering a lot in the coronavirus crisis, Quader said Prime Minister Sheikh Hasina has stood by them and the AL leaders, public representatives and affluent people are also coming forward to help the poor and workless people.

Noting that the whole world is going through a terrible situation due to coronavirus, he said the world did not experience such crisis after the World War-II.

He said crisis has been deepening in every country of the world day by day, while the government, led by Prime Minister Sheikh Hasina, is working sincerely to address the coronavirus crisis.