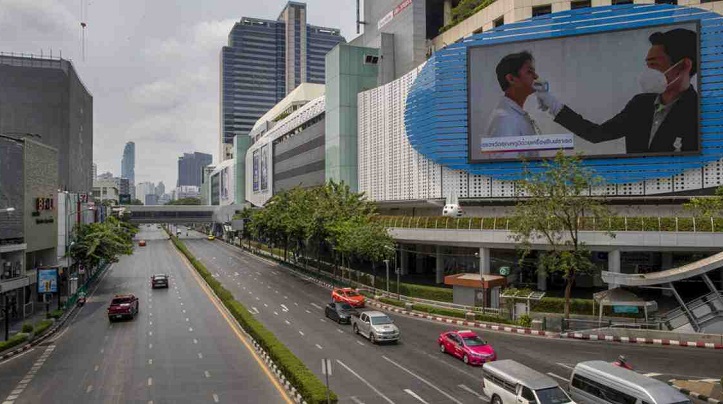 An educational visual on the prevention of the new coronavirus prevention is shown on a giant screen in a nearly-deserted intersection in Bangkok, Thailand, Thursday, April 2, 2020. Photo: AP

The measure announced Thursday evening by Prime Minister Prayuth Chan-ocha is the latest in a slow tightening of restrictions since the country's cases began rising sharply in mid-March. Thailand announced 104 new confirmed cases of the disease on Thursday, bringing its total to 1,875.

The restrictions are still not as sweeping as in some other countries, where people have been told to stay home throughout the day except for necessary tasks.

Prayuth said exceptions under the curfew will be allowed for people who work in medicine, banking and delivery of consumable goods, crops, medicine, medical supplies and equipment, newspapers and gas; people who work shifts; people who are traveling to and from an airport; and people with permission from their district officials.

Last week, the government enacted a one-month state of emergency allowing it to impose harsh restrictions not normally allowed under law. They include the power to implement curfews, censor the media, disperse gatherings and deploy the military for enforcement.

Financial packages to aid businesses and individuals affected by the restrictions have also been approved.

Measures instituted before the state of emergency include shutting down all schools, postponing a major three-day holiday and allowing provincial governors to close any gathering spaces and closely regulate travel. Restaurants have been closed except for takeout and delivery service.

International arrivals have been tightly restricted, requiring medical clearances prior to departure and 14-day self-isolation after arrival.