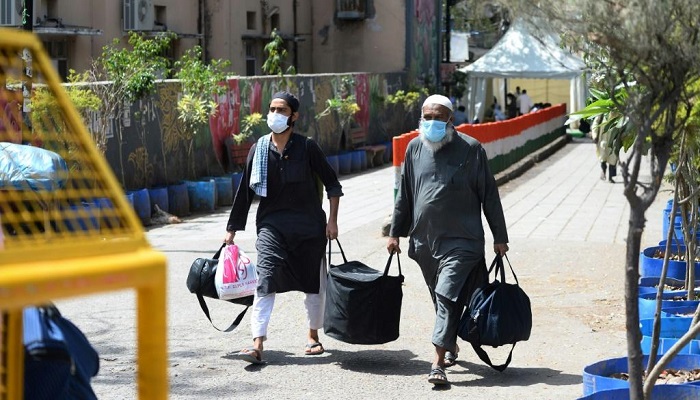 A large religious gathering in New Delhi has sparked a manhunt across India for suspected coronavirus cases after being linked to dozens of infections and several deaths.

The gathering emerged as one of India's major virus hotspots after thousands flocked to an Islamic religious centre in the Nizamuddin West neighbourhood of Delhi.

Some returned home to other states after the gathering, but many remained in the vicinity, saying they were trapped because public transport had been shut down due to the virus.

Late Monday and Tuesday, the warren of lanes near the religious centre -- near several prominent Sufi shrines -- were taped off by officials in hazmat suits.

More than 1,000 people were taken in buses from the area by police, with 335 admitted to hospital and the rest quarantined, Delhi Health Minister Satyendar Jain told reporters Tuesday.

At least 10 attendees -- including six in southern Telangana state and three in Delhi -- have died from Covid-19 in the past few days, authorities said.

The Press Trust of India said around 8,000 people took part in the event, with Telangana officials saying at least 1,000 attendees were from that state alone.

Infections in other states and territories have also been linked to the gathering.

Their whereabouts were not immediately known.

"A grave crime has been committed," Jain said of the event, which took place as the Delhi government started to introduce restrictions on large gatherings on March 13.

The centre, the global headquarters for the Tablighi Jamaat missionary movement, insisted it had followed regulations.

It said attendees were stranded after public transport was shut down ahead of a nationwide curfew imposed from March 25.

"We were always taking this issue seriously, we had been in touch with authorities to arrange for transport for the attendees," Musharraf Ali, a member of the movement, told reporters Tuesday.

It was not yet clear if the Indian outbreak is linked to another Tablighi Jamaat event that was held in Malaysia from February 27 to March 1.

About half of Malaysia's 2,626 infections have been directly linked to that event, which was attended by 16,000 people -- including 1,500 foreigners.