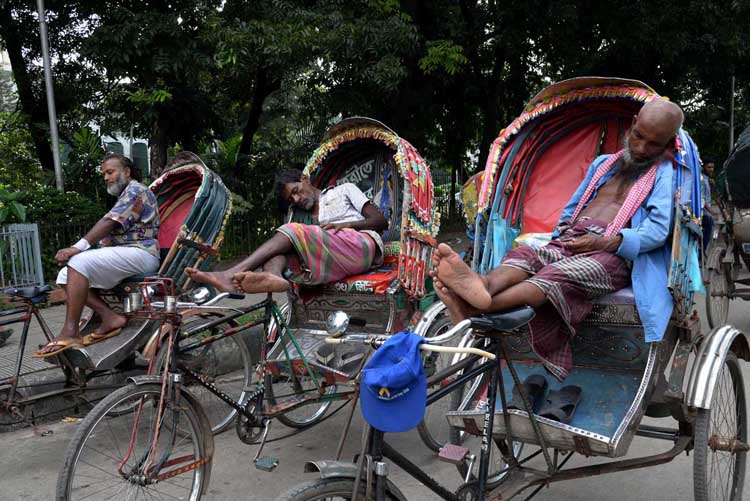 Woes and sufferings of the low-income groups, mostly the daily wage earners, have mounted in the capital and its outskirts in the wake of the 10-day general holiday across the country amid the Coronavirus pandemic.

This poverty-stricken group is facing extreme hardship for lack of work and income-generating activities during the general holiday.

The government has announced the 10-day general holiday and restricted the movement of all public transports and opening of shops and businesses except for foods and medicine, virtually putting the nation into a lockdown in a bid to curb the spread of the Covid-19.

On the third day of the 10-day holiday on Saturday, many working-class people including day labourers, rickshaw pullers, hawkers, and street vendors were seen thronging the streets in the hope of making a living just for the day.

But they had to go back to their shanties empty-handed.

“I do not have enough food back in home. I can not afford to stay at home without any income,” said day labourer Abul Kalam.

Though the general holiday could not confine these daily wage earners to their home, it has dealt a heavy blow to the income of these people.

The roads are deserted as people are not coming out of their homes except for any emergencies out of fear of getting infected with the virus, officially known as Covid-19.

Many of the lower-income people have already left the capital for their ancestral homes.  The workers have no work now. Many construction workers are now jobless as the construction sites remain shut.

The rickshaw pullers do not get passengers like the normal time.

Most of the private job holders got leaves for the government-announced holiday, but many were not paid salaries in March and also in February in many cases.

Some working-class people said it would be a great relief for them if their landowners could go a little easy on house rent.

Fazlul Haque, an employee of a private firm and a resident of Boro Beraid in Badda, told the Daily Sun that he makes Tk 30,000 a month as salary. “I have to pay Tk 12,000 for house rent and utility bills. I cannot save a single penny after paying for my children’ education, foods and other expenditures.”

“I have not got my February salary. The office is closed. I do not know when I will get my salary. But my house rent has to be paid at the end of the month.”

“It will be a huge help if the landlord is a bit flexible this month,” he said.

One Russell came to Mohammapur in Dhaka from Bhola’s Bankerhat six months ago.  He managed a job at a three-wheeler human hauler (leguna) as an assistant to the driver. There is no work for him over the last few days as public transports have stopped plying on the roads during the extended holiday.

He has some money left for three to four days. “I do not know what I will do after that.”

Didarul Mia, who works at an electronics shop in Gulshan-1, told the Daily Sun that their shop is closed, and his March salary was uncertain.

Bashir Hossain, a driver of a minibus of Bhorer Alo Paribahan on Gabtali to Babu Bazar route, said: “I cannot think of any ways to meet the living expenses. I do not have any savings. House rent is the most important thing I must take care of at the beginning of the month.”

“Today is the second day of the lockdown. Eight more days left. Allah knows how I will meet family expenses,” said ASraf who has been pulling rickshaw in Dhaka for a decade.

Many of the daily wage-earners expressed frustration as many of them have already become jobless because of the lockdown.

Asked if the government has provided them with any cash or food, they said they have not received any support yet.

In a televised address to the nation on Wednesday, Prime Minister Sheikh Hasina announced wider social safety-net measures for low-income and homeless people to help them tackle tough times during the coronavirus crisis.

The premier said low-income people will receive government assistance under the “Ghore Fera” (Returning Home) programme in their village homes because many have lost jobs due to the coronavirus.

Besides, the homeless and landless will get free housing, food for six months and some cash, while programmes such as Vulnerable Group Development, Vulnerable Group Feeding and Tk10 per kg rice sales will be continued, the premier announced.