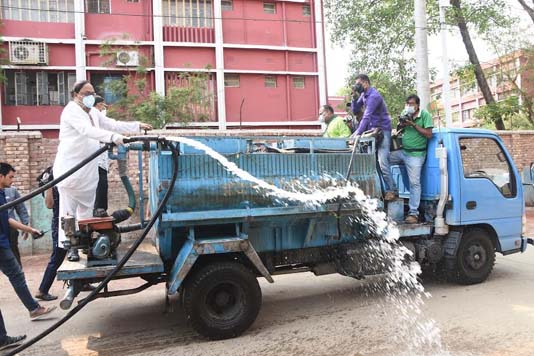 A total of 237 new more patients have been put under home quarantine in Rajshahi division in the last 24 hours to prevent community transmission of coronavirus (COVID-19).

Divisional Director of Health Dr Gopendra Nath Acharya said 237 patients have been quarantined at homes in all eight districts of the division till 8 am on Sunday totaling the number to 3,883 since March 10 last.

Of them, 2,842 were released after expiry of their 14-day quarantine till this morning in the division. Among the new ones, 131 have been home-quarantined in Rajshahi, eight in Chapainawabgonj, 13 in Natore, 24 in Joypurhat, 56 in Bogura, three in Pabna and two in Sirajgonj. 703 others were released during the last 24 hours.

Dr Gopen Acharya said a hectic measure has been adopted to bring all the migrants and other suspects under home quarantine to stem the virus spread. He also said comprehensive efforts are continuing to ensure following the health related guidelines like staying at home, social distancing and washing hands with water and soap.

The law-enforcing agencies have intensified their activities to enforce the health related directives everywhere in the division aimed at curbing the virus outbreak.

Each of the 20,000 hand-to-mouth beneficiary households will get 10 kilograms of rice and 500 grams of pulse at the initial stage.

“We have adopted the initiative of distributing food grains among the daily wage earners to help them survive during the ongoing 10-day shutdown to avoid the spread of coronavirus,” said RCC Mayor AHM Khairuzzaman Liton said here today.

He said the city corporation has raised a stock of 100 tonnes of rice and 20 tonnes of pulse from the city’s affluent persons for distribution. “We will seek more support from the richer class and affluent people for the welfare of the distressed sections of society,” he added.

Apart from the private initiative, the corporation received 60 tonnes of rice from the government for distributing among 200 destitute people in each of the 30 wards.

Each of the destitute persons would get 10 kg of rice under the relief distribution programme. In addition to the food aid, the city corporation has adopted diversified measures, including creating awareness among the public in general through distributing leaflets and using loudspeakers.

Masks and sanitizers are being distributed among the health, conservancy workers and the city dwellers, he said, adding, personal protective equipment will be distributed to protect the doctors and nurses from infection.

Mentioning that booths for using hand sanitizers by the roaming people were set up on 26 spots across the city, Liton said steps have also been taken to strengthen the Rajshahi Medical College Hospital and other hospitals for treatment of the infected patients.

Disinfectant Spraying Drive has been continuing on the city streets through using three water-tanks, one Jed and a police water-tank since last week.