Coronavirus: More than 900 deaths in a day in Italy 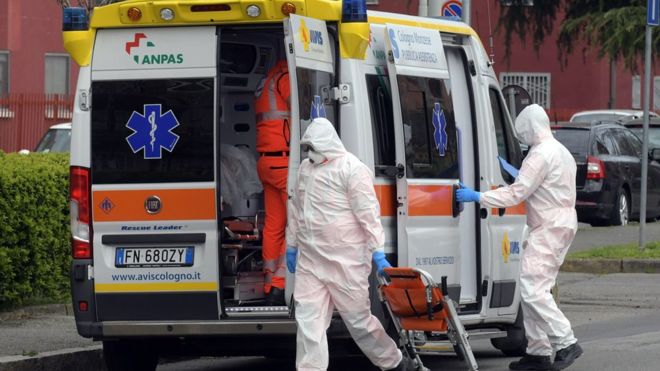 Italy has recorded 919 new coronavirus deaths, its highest daily figure in the outbreak so far.

It means 9,134 people have now died from the virus in the country.

Earlier World Health Organization chief Dr Tedros Adhanom Ghebreyesus said a "chronic global shortage" of protective equipment was one of the "most urgent threats" to the ability to save lives.

Italy is the worst-affected in Europe. Almost everything has been closed and people told to stay at home.

Earlier on Friday, authorities warned that restrictions were likely to be extended beyond 3 April.

What is the latest from Italy?

The northern region of Lombardy, the hardest hit in the country, saw a sharp increase in deaths from Covid-19, the disease caused by the virus. This followed a decline on Thursday that had raised hopes the outbreak there could have peaked.

There were 5,959 new cases nationwide - a slightly lower increase than Thursday's figure. There has been a total of nearly 86,500 confirmed cases in the country.
Fears are also growing of an increase in cases in the poorer south of the country.

On Thursday Vincenzo De Luca, president of the Campania region around Naples, said the central government had not provided promised ventilators and other life-saving equipment.

"At this point there is the real prospect that Lombardy's tragedy is about to become the south's tragedy," he said.

The same day Prime Minister Giuseppe Conte said all of Europe would be hit by a severe recession. He promised a second stimulus package for Italy worth at least €25bn (£23bn; $27bn).