Hasan urges police not to harass people on streets 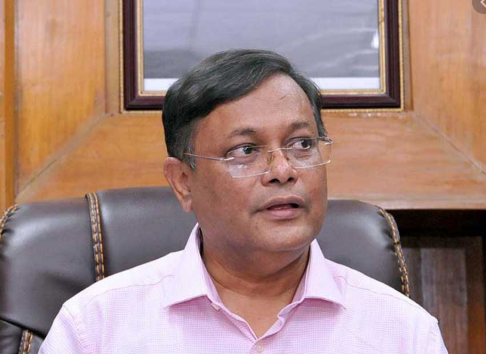 “The government has advised the people not to roam on streets unnecessarily in view of the outbreak of coronavirus. But someone needs to go outside of home (for emergency work). So, I request the members of police not to harass anybody without any reason,” he told reporters at his Minto Road official residence here.

Hasan, also Awami League joint general secretary, said if required, anybody can go outside of home.

But if anyone is found roaming on the streets without any reason, the police members need to convince him or her to stay at home to keep himself or herself protected from being infected by the deadly virus, he said, adding the that Police Headquarters have given directives to police personnel at grassroots to this end.

Putting emphasis on increasing budgetary allocation for research in medical science all over the globe, the information minister said the world community today witness that how much the human beings are now helpless for invisible virus.

Around one-third of the people of the planet remain locked down now and the entire world gets stuck, he added.

Hasan said the entire world’s official expenditure on medical research is only $ 2.3 billion which is equal to the cost of making few modern military aircraft.

“We can’t fight or defeat a virus. But we’re constantly increasing military expenditure to wage a war against each other’s nations. Military expenditure has increased by 2.6 percent in 2018 compared to 2017 and it’s continuously rising,” he said.

The information minister said it is the high time for the mankind that it should think about whether it will raise military expenditure or increase expenditure to ensure health safety of human beings.

“Similar viral attack may take place again in the days to come. So it is a demand of the time to boost expenditure on medical science to safeguard the public health,” he opined.

Hasan pointed out that Prime Minister Sheikh Hasina in her Wednesday’s nationwide address called upon the people to stay at home to protect themselves and to help the government to contain the spread of the deadly novel coronavirus (COVID-19).

The IEDRC in a press briefing today announced four new positive cases of COVID-19 have been detected raising the total number to 48 while no death has been reported in the last 24 hours.

The minister said the government has declared a 10-day general holiday, suspended operation of all public transports, vessels, trains and domestic flights and shut down educational intuitions urging the people to maintain the ‘stay at home’ rules.

Responding to the call of the premier, the people truly are staying at home and following every directive of the government as well as the physicians and experts to fight the deadly virus, he added.

Hasan said the prime minister, in her address, mentioned the government’s preparedness to tackle the economic challenge in the wake of the crisis and announced a Taka 5,000 crore stimulus package to this end.

Hasan said the premier’s addressed has assured the nation, and everyone praised it.

He said the prime minister managed the bail of corruption case convict BNP Chairperson Begum Khaleda Zia in response to a written plea of her family members, considering it on humanitarian grounds and forgetting everything.

Hasan said the prime minister has forgotten the incidents of fake birthday celebration of Begum Zia on August 15 which is the martyrdom day of Father of the Nation Bangabandhu Sheikh Mujibur Rahman and most of his family members.

“When the BNP leader’s younger son Arafat Rahman Koko passed away, the premier went to console the bereaved mother but, she (premier) had to return from gate of Khaleda Zia’s home, standing for 15 minutes, he said.

The minister said Prime Minister Sheikh Hasina also forgot the incidents of gruesome grenade attacks carried out on her on August 21 in 2004 under the patronization of the then BNP government and Khaleda Zia’s elder son Tarique Rahman.

Hasan also criticised the BNP to gather its leaders and workers in huge numbers on the occasion of the release of Khaleda Zia by violating the ‘stay at home’ and health rules.

“It’s very shocking that when the people all over the country are maintaining the ‘stay at home’ and health rules, the BNP leaders and workers took to streets in hundreds to escort the BNP chief from Bangabandhu Sheikh Mujib Medical University (BSMMU) Hospital to Gulshan BNP office,” he said.

The minister went on saying: “It’s nothing but an irresponsible behavior from BNP to take to streets when the government has suspended all scheduled programmes of the Independence Day.”

Hasan urged all political parties including BNP to cooperate the government in containing the spread of the deadly virus shunning all differences.

Asked about what measures have been taken for lower income group, he said the government has given directives to the local administration to provide rice at Taka10 per kg for poor people.

In this connection, the minister called upon the well-off people to extend their helping hands to the poor and distressed people in this crisis period.