Khaleda to remain in quarantine: Fakhrul 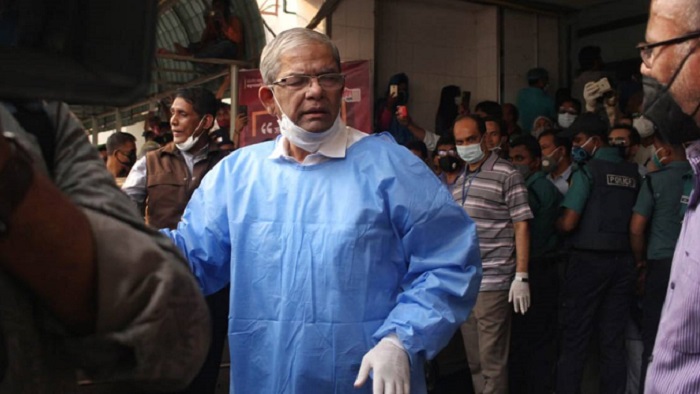 BNP Chairperson Khaleda Zia, who was released on Wednesday from jail for six months following an executive order, will remain in quarantine for a few days at her Gulshan residence as per her physicians’ advice.

Party secretary general Mirza Fakhrul Islam Alamgir came up with the information while talking to journalists after meeting Khaleda Zia along with BNP standing committee members at her house on Wednesday night.

“We just met madam (Khaleda). She’s very sick. Physicians visited her and discussed ways of ensuring her treatment. They advised us to keep her in quarantine for some days so that no-one can meet her now,” he said.

The BNP leader, however, said they did not discuss any political matters with her.

He said Khaleda urged the country’s people and BNP leaders and activists to remain alert and maintain protective measures to get rid of coronavirus disaster.

Asked for how many days Khaleda may remain there in quarantine, he said doctors will decide it.

Earlier, the BNP chief reached her Gulshan residence around 5:15pm after walking out of the prison cell of Bangabandhu Sheikh Mujib Medical University (BSMMU).

The government passed the executive order for her release upon two conditions -- receiving treatment staying at her Gulshan residence and not leaving the country.

Meanwhile, ‘Firoza’, the luxury home of Khaleda at Road No 79 in Dhaka’s Gulshan area which turned into an abandoned house since she went to jail, was prepared for her comfortable stay there.

The High Court later raised her punishment to 10 years in the case following an appeal by the Anti-Corruption Commission.

She was admitted to BSMMU on April 1 2019 following an order of the apex court.