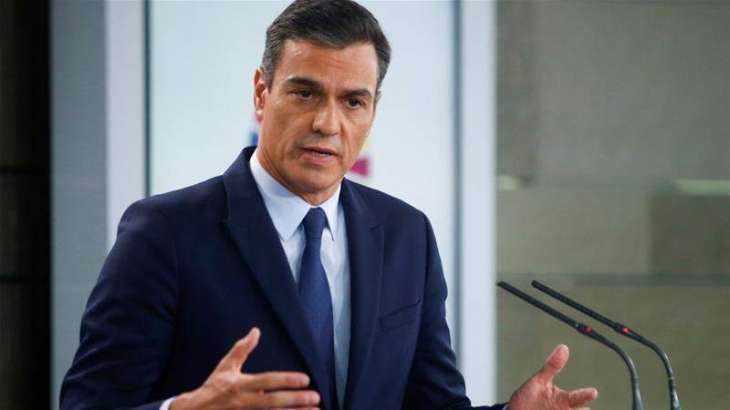 The Spanish government will allocate up to 100 billion euros ($110 billion) for loan guarantees to businesses to buffer the economy from the damage caused by the coronavirus outbreak, Prime Minister Pedro Sanchez said Tuesday.

Spain will "mobilise up to 200 billion euros" in total when public funds set aside to boost jobless benefits and aid workers, as well as potential contributions from the private sector, are tallied, he said.

The amount represents about 20 percent of the country annual economic output, the premier said.

"This is an exceptional moment which requires exceptional measures," Sanchez said after meeting with his cabinet by video conference as the nation of around 46 million people is in a near total lockdown to curb the spread of the virus.

"It is an enormous and decisive effort which responds to the magnitude of the social and economic challenge which we are facing."

Spain is the fourth worst-hit country in the world after China, Italy and Iran. It has so far recorded over 11,000 cases of the disease and nearly 500 deaths.

The measures which the government approved on Tuesday will allow workers who are laid off from their jobs to collect jobless benefits even if they had not worked long enough to qualify for them.

Self-employed workers will also have easier access to jobless benefits, while 600 million euros will be set aside to provide aid to vulnerable groups such as the elderly and families needing help to have internet connection during this time.

"We will spare no expense, nobody will be left behind," Sanchez said.

"The goal is to ensure a temporary crisis does not have a permanent negative impact on our labour market."

The government also tightened rules on foreign investments to make sure that companies from outside of the European Union can not take control of "strategic Spanish firms".

Sanchez also announced a moratorium on mortgage payments for people struggling financially as a result of the economic turmoil caused by the coronavirus outbreak in a country that is still traumatised by the wave of evictions which took place during the severe recession of 2008-2011.