A tribute to Bangabandhu on his birth centenary 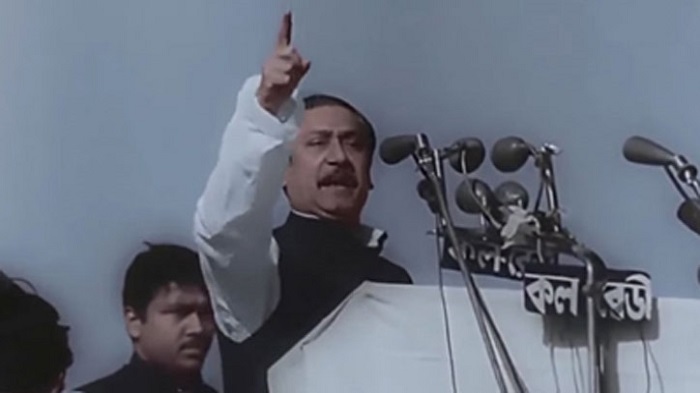 Comparing Father of the Nation Bangabandhu Sheikh Mujibur Rahman to the Himalayas, revolutionary Cuban leader Fidel Castro said in 1973, “I have not seen the Himalayas. But I have seen Sheikh Mujib. In personality and in courage, this man is the Himalayas.” The towering kudos and dignity of Bangabandhu can be perceived from this enunciation by Castro.

Bangabandhu was a real epitome of bravery in attitude and personality. He, in fact, was gifted with remarkable organisational acumen. With the summation of nationalism, secularism, socialism, and people-orientation, his philosophy stands for loving and working for the wellbeing of everyone in Bangladesh which made him the greatest Bengali of a thousand years.

Bangabandhu once said, “My greatest strength is I love my people while my weakness is I love them too much.” The dream of the Nation’s Father was to build a prosperous country which he named after ‘Sonar Bangla’.

Bangabandhu struggled for human rights, cultural self-determination, social and economic righteousness of the suppressed Bengali people throughout his life. He managed to awaken a hope for a sovereign nation and thriving country and thus, successfully led it towards the achieving the dream under his charismatic leadership.

Egyptian journalist Mohamed Hassanein Heikal said, “Mujib is the harbinger of freedom for all Bengalis. He is the hero of the Bengalis, in the past and in the times that are.” ‘The poet of Politics’ dedicated his entire life for the people's cause and never stepped back while fighting for the truth.

Bangabandhu spent more than 13 of his 55 years of life in prison for the rights of people. He worked his whole life in establishing transparency, equality, and socio-political integrity. He envisioned a dream for a prosperous Bangladesh where people of all classes would be able to live in harmony. According to him, “When people of the country can eat much food, they will have a dignified life; only then, the soul of these millions of martyrs will be satisfied.”

He used to dream for “Sonar Bangla” which would be free from hunger, poverty, corruption, illiteracy, communalism and economic-thralldom. He knew that true freedom would not come as long as our country's people could not eat with their full stomach and as long as they got economic emancipation. He never stopped dreaming for his people even until his last breath. He was leading Bangladesh to be a prosperous country.

However, to the whole Bengali nation March 17, 1920 is a consecrate day as the Father of the Nation Bangabandhu Sheikh Mujibur Rahman was born on that day. The significance of the day lies in the fact that without his birth, the independence of Bangladesh would not have emerged. On the occasion of his birth centenary, Bangabandhu's daughter honorable Prime Minister Sheikh Hasina announced the year 2020-21 as ‘Mujib Year’. She said, “Mujib Year will be celebrated from the birth date of Bangabandhu March 17, 2020 to March 26, 2021. There will also be the golden jubilee of our independence. The national and party days will also be observed with special importance. This year will be observed up to the ward and union level of the country. Mujib Year will be celebrated in the government year as well.”

Not only in Bangladesh but also around the world ‘Mujib Year’ will be celebrated amid great festivity. Therefore, 2020 is a momentous time of our national life. The commitment of a comprehensive analysis of the past 50 and 100 years of history and all activities, special achievements, observations, evaluations, planning and implementation is imminent.

“Along with celebrating Bangabandhu’s birth centenary, we should follow his ideologies and exercise them in our lives that would be the best way to honour and remember Bangabandhu”, said PM Sheikh Hasina. By following his philosophy, we can build a developed and prosperous Bangladesh free of hunger and poverty where there are socio-political and socio-economic liberty. The able successor of Bangabandhu, thus, Deshrotno Sheikh Hasina is working relentlessly for the upliftment of Bangladesh on the basis of her father’s vision. She is completing the incomplete tasks of Bangabandhu. Under her dynamic leadership Bangladesh is gradually moving ahead.

The development journey of Bangladesh is indeed incredible. The total economy of the country was only about 8 billion US dollars in 1972, but now it turns over $300 billion. The annual per capita income has nearly tripled during the last decade reaching $1,908 last year. Our foreign currency reserve is $324 billion. Henry Kissinger’s once ‘bottomless basket’ Bangladesh is now mentioned as a ‘Role Model’ for its improvement in various sectors including education, health, agriculture, information, technology, empowerment of women and so on. Today the whole world is flabbergasted observing the miraculous advancement of Bangladesh. Addressing Bangladesh as the new Asian Tiger, a report of Business Insider UK said,”The economy of the country has been one of the top performers in Asia over the past few decades, averaging an annual growth of more than 6%. Bangladesh has picked up about two-thirds of China's low-end manufacturing market share in Europe.”

We are now self-sufficient in food and fish production. There is no shortage of food in our country and no people die due to hunger. Even we have achieved the capacity to export the surplus production to foreign countries. The RMG sector is holding the second position in the global economy. Foreign investors are showing interest in investing here. We are constructing the Padma Bridge with our own finance. Besides this, some voluminous projects are being constructed here including Ruppur Nuclear Power Plant, Metro Rail Project, Karnaphuli Tunnel etc. With the visionary leadership of Bangabandhu’s daughter, Bangladesh has now dignified dreams of becoming an upper middle-income country in 2031 fuelled by vision-2021 and achieving SDGs by 2030. It has also quarterbacked to become a developed country by 2041.

We, above all, should work with patriotic spirit to implement the dreams of Bangabandhu. The best way to show respect to Bangabandhu is to follow his thoughts on more legitimate development and pursue the way of realising some of those dreams through our collective or individual endeavors. There is no contradiction that Bangabandhu gave us a nation, gave us a free state, and in fact gave us everything that we can all be proud of.

Bangabandhu will remain in the hearts of the people and remain as the eternal source of inspiration as long as Bangladesh will exist. Hence, Poet Anandashankar Roy said , “Jotokal robe Padma, Megna, Gauri, Jamuna bohoman, totokal robe kirti tomar Sheikh Mujibur Rahman,” (in translation: “As long as the Padma , Meghna, Gouri, Jamuna flow on, Sheikh Mujibur Rahman, your accomplishment will live on).”

By: Hasan Mahmud Rubel, a lecturer of a private university