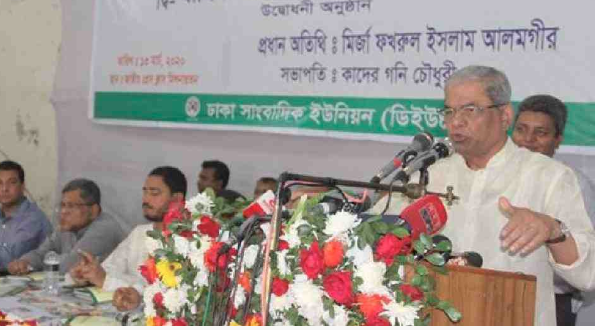 BNP secretary general Mirza Fakhrul Islam Alamgir on Friday bemoaned that the country’s media industry is now 'under the grip of businessmen who cannot go against the government to protect their own interests'.

Speaking at the inaugural session of the biennial general meeting of Dhaka Union of Journalists (DUJ) at the Jatiya Press Club, he also alleged the government is ‘controlling’ the media by enacting various laws one after another.

"The biggest thing is that the newspapers are no longer in the hands of media workers. The newspapers now have gone to the hands of the businessmen. This is the biggest reality. Most newspaper owners in our country have no way to go against the government as they have to protect their businesses,” the BNP leader observed.

He further said, "You (journalists) know it better how the government is taking measures gradually enacting laws one after another so that you can’t go out of its control, and you can’t write anything against it.”

He said the journalists themselves are now exercising self-censorship to protect them from being subjected to harassment by the laws. “Editors now say this news can be polished and that news can’t be published. In most cases, we see flattery and it has reached such a level that the professional flatters in Bangladesh don’t now be ashamed of. These are the facts.”

He also said there is exception as some journalists always try to present the truth whenever they get a chance as they did during the last elections to two Dhaka city corporations.

“We came to know by our journalist brothers about how the city corporation elections were held. We’re also informed by you how a godown of crores of taka has been created, how the money is being siphoned off abroad, how money disappeared from the Bangladesh Bank and how banks are depleted through plundering,” Fakhrul said appreciating the journalists.

He said journalists are also exposing how the ruling party leaders are ‘plundering public money and capturing’ public assets. “But journalists can’t always play the role that people expect from them due to the prevailing situation in the country. There’s no democracy and rights of people in Bangladesh. The country is now under the grip of a fascist and despotic ruler.”

Fakhrul said their party Chairpersons Khaleda Zia was convicted and sent to jail in ‘false’ cases, but she is not being released on humanitarian ground though she is very sick.

He said the government has ruined the judiciary completely the day former Chief Justice SK Sinha was sent abroad by force at gunpoint. “They (judges) now don’t dare give any verdict going against the government’s will after that incident.”

Fakhrul said a lower court judge who acquitted BNP acting chairman Tarique Rahman from the charges brought against him in a case had to flee the country to save his life. “A judge in Pirojpur who ordered sending local Awami League President to jail recently was transferred within a few hours. This is the scenario of the judiciary.”

To get rid of the situation, he said there is no alternative to waging a strong and united movement to ‘restore’ democracy in the country.

The BNP leader also voiced anger as the trial of the journalist couple Sagar-Runi has not been completed in the last eight years.

Fakhrul also voiced concern over the disappearance of ‘38’ journalists and termination of journalists from different media outlets.

He called upon journalists to get united to stop of termination of their jobs and realise their various rights.