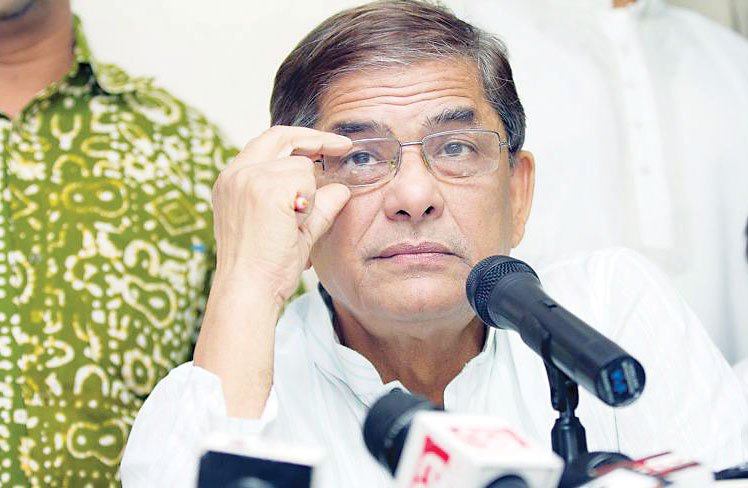 BNP Secretary General Mirza Fakhrul Islam Alamgir on Wednesday alleged that an influential quarter is behind the fire in Mirpur’s Rupnagar Slum and they did it to launch a housing project there.

Talking to reports after visiting the fire-hit spot, he also demanded an impartial investigation into the incident.

“We’re seeing repeated fire incidents in this Rupnagar slum. We had also come here a few days before the city corporation elections. The slum residents have an allegation that an influential quarter pampered by the ruling party is trying to build housing or plots here evicting the shanties,” the BNP leader said.

He further said, "We think a thorough investigation into this incident needs to be carried out, and it has to be neutral one free from any influence of any quarter.”

Fakhrul bemoaned that though the new housing projects are being taken for the wealthy section of people, no step has so far been adopted for ensuring the accommodation and rehabilitation of the slum dwellers and the hardcore poor. “It’s very unfortunate for us.”

Mentioning that low-income people stay in the shanties, he said those slum dwellers were subjected to the fire have become totally hapless as they lost their all belongings.

Fakhrul expressed deep sorrow over the losses suffered by the slum dwellers in the fire. “We also condemn the inaction of the authorities concerned regarding ensuring fire safety of the slum dwellers even after repeated such incidents.”

He also voiced anger over fire fighters’ delayed repose to extinguish the blaze.

The BNP leader expressed sympathy to the fire victims and demanded the government ensure proper compensation for them and their rehabilitation.

He assured the fire victims that their party will stand by them.

The massive fire which broke out at Rupnagar Slum in the city’s Mirpur area on Wednesday morning was brought under control after around three hours of frantic efforts by the fire fighters.

Witnesses said over 100 shanties were gutted in the devastating fire.