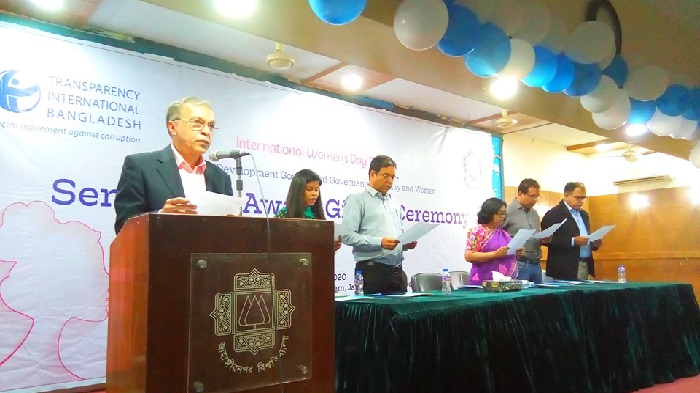 Marking the International Women’s Day-2020, Youth Engagement and Support (YES) group of Jahangirnagar University in association with Transparency International Bangladesh (TIB) organised the event at the seminar room of Zahir Raihan auditorium on the campus around 11 am.

Executive Director of the TIB Dr Iftekharuzzaman addressed the seminar as chief guest while Professor Dr Naseem Akhter Hossain of Government and Politics Department of the university was as keynote speaker.

In the speech, Prof Naseem Akhter Hossain said, “Physical condition can’t be the cause of discrimination between men and women. Nobody should be justified in the consideration of physical anatomy. Don't be aggressive to women. We can build a beautiful society by ensuring equality of women.”

Addressing the function Dr Iftekharuzzaman said, “We are much forwarded than other countries on the basis woman's right. But, women are still facing discrimination in our society. In a country where the prime minister's intervention is required for ensuring justice of Nusrat rape case, where the police provide security to the criminals, justice is less likely here. Now the top post of the country is led by women. So, if we want and maintain rules and regulations of the state properly, we can gain sustainable women empowerment in our country.”

A blood test programme was also organised in association with Bangabandhu Sheikh Mujibur Rahman hall unit of BADHAN (a voluntary blood donation organisation of the JU).

Earlier, three branches of ‘Natural Open Library’, financed by the TIB were set up at three different places of the university campus. TIB executive director Dr Iftekharuzzaman inaugurated the library at Teacher-Student Centre (TSC) of the university.