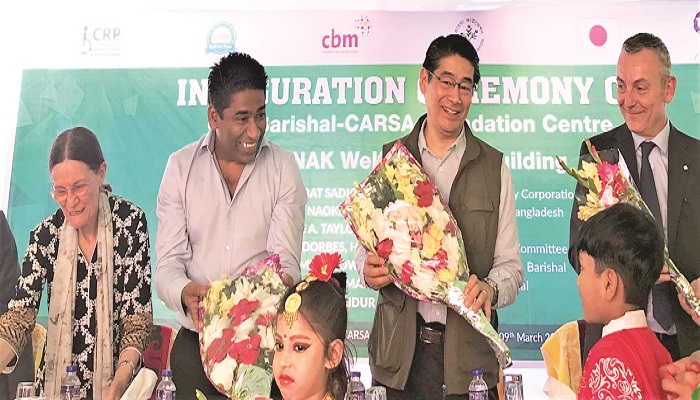 Barishal City Corporation Mayor Serniabat Sadik Abdullah on Monday inaugurated the divisional centre of Centre for Rehabilitation of the Paralysed (CRP) in the city as CRP-Barishal, CARSA Foundation.

He inaugurated the new divisional centre at the SEKNAK Welfare Trust building, said a press release.

Besides, the Prosthetics and Orthotics service with the support of the ICRC, third of its kind in the country, will provide artificial limbs and supportive devices to the vulnerable people with disabilities in the division.

This service will further help the PwDs to regain their mobility and functionality so that they can lead a life in dignity and play an active role in the society.

Japan Ambassador to Bangladesh Ito Naoki was present as the Guest of Honor while head of delegation, International Committee for the Red Cross (ICRC) Pierre Dorbes, Barishal Divisional Commissioner Mohammad Yamin Chowdhury, and District Commissioner S M Ajior Rahman attended the event with Chairman of Trust for the Rehabilitation of the Paralysed, Muhammad Saidur Rahman in the chair.

Members of SEKNAK Welfare Trust, representatives of CARSA Foundation, CRP’s Trustee members, local renowned personnel and patients were among the other attendees.