Historic March 7 speech: A preamble to the emancipation of Bangladesh 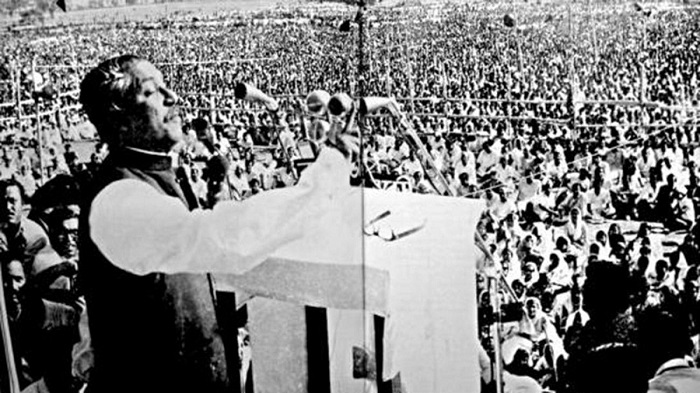 Throughout history, the human voice has always been a powerful weapon for change. The history of a nation can be changed by a sturdy speech of a great leader.  Such as; ‘The Gettysburg Address’ of Abraham Lincoln (1883), ‘I have a Dream’ of Martin Luther King (1963) and so on.

But the remarkable March 7 speech of the Father of the Nation Bangabandhu Sheikh Mujibur Rahman is one of the demarcating junctures in the history of Bangali and Bangladesh. This fiery and ground-breaking speech was concurrently the declaration of our emancipation and the inspiration of our liberation war.

With his towering personality, ‘The Poet of Politics’ Bangabandhu robustly delivered this timeless speech of about 18 minutes consisting of 1107 words atRamna Race Course Ground (Dhaka) before over a million people in 1971. He, in his magnificent and thunderous voice, proclaimed, “The struggle this timeis a struggle for our emancipation, the struggle this time is a struggle for our independence.”By liberation, Bangabandhu meant emancipation from all sorts of deprivation and discrimination.

Howsoever, when Bangabandhu took the stage, he was already the undisputed leader of Bengali speaking people of East Pakistan, who delegated him to speak on their behalf of, looked up to him to divulge their thirst for democratic rights, cultural self-determination, social and economic righteousness.It was an onerous responsibility but Bangabandhu rose his vigorous voice and spoke, using his considerable rhetorical skills, judgement and charisma, to present – from one perspective – a constitutional argument for the legitimate claims of his people and- on the contrary- to guide them to take up arms for accomplishing national emancipation. The extempore speech inspired an entire nation to join the liberation war.

According to Dr. Arefin Siddique, “The March 7 speech was the main mantra and theory for an independent Bangladesh. The address was like a war-cry during the nine months of the liberation war.” Speech of Bangabandhu is not merely an eloquent art. In terms of Bengali nationhood and the achievement of a sovereign identity,it stands equal to the Magna Carta.The entire speech was a dialogue between the people of Bangladesh and their undisputed leader on the eve of Bangladesh's birth. Prof. Dr. Md. Delowar Hossain said, “The March 7 speech was the kneading of both preparation for war and call for independence. Bangabandhu simultaneously gave orders and warnings in his laconic massage.”

On March 1, 1971, President Yahya Khan announced the postponement until “a later date” of the National Assembly. Bangabandhu Sheikh Mujibur Rahman react furiously to the delay at a press conference and called for emancipation of 70 million Bangalis. He announced a 6-day program which included observance of complete strike in Dhaka on March 2 and a country-wide strike on the March 3. On the day, Bangabandhu addressed a mammoth congregation at Paltan Maidan where a national flag of Bangladesh was formally hoisted and a manifesto of the proposed independent new nation was announced. The national anthem of the would-be new country was declared as well. Observing dilly-dallyactivities of Yahya and his collaborator Bhutto(their reluctance regarding hand over regime in a systematic scheme), Bangabandhu announced that on March 7 he would give the formal directives to the nation about the future course of action.

Before the March 7 address, the air of the country was enceinte with assumptions about what Bangabandhu would proclaim. Would it be a unilateral declaration of independence or would he proclaim some sort of negotiation? Bangabandhu arrived at the venue at 2.45pm and spoke only 19 minutes. It was thrilling 19 minutes. Not only the people of entire Pakistan and West Bengal but also the world was holding its breath. He declared a programme of non-cooperation unless their demands were met. Bangabandhu, in his speech, called for discussion on one side and on other side heencouraged his people to get ready for the liberation war equipped with weapons. He said, “Immediately set up committees under the leadership of Awami League to carry on our struggle in every neighbourhood, village, union and subdivision of this land. You must prepare yourselves now with what you have for the struggle ahead.” Again, he rose his voice stating, “even if I am not around to give you the orders and if my associates are also not to be found, I ask you to continue your movement unabated.”He gave this instruction considering the odious plans of Pakistan army backed government to arrest or to kill him. This instruction provided a clear indication of the liberation of Bangladesh through guerrilla warfare.

The important part of his speech is that he did not directly mention about independence but made his people prepared for war, liberation and independence. The great leader reiterated the words ‘release’ and ‘released’ throughout his talking. In the 4th line of his speech, he uttered, “peoples’ economic, political and cultural emancipation.”He also said, “Since we have given blood, we will give more of it. But InShaAllah, we will free the people of this land.”Bangabandhu did not stop after saying the struggle was for independence. He rather went on announcing that the struggle is for our liberation. He was completely aware of the need for struggle for emancipation. Then, he added, “Joy Bangla.”Afterthese words, there is no need to declare independence.Moreover, he used the word ‘Bangladesh’ and the sound ‘Joy Bangla’ as a slogan to finalise the naming of a new state in the future.This address was a de-facto declaration of Bangladesh’s independence which united 7crore Bangalis and stimulated them to took part in the liberation war.According to Prime Minister Sheikh Hasina, “Through this speech, Bangabandhu gave the framework of future Bangladesh.”

This historical speech, however,literally was a revolution which provided political direction to emancipation of the Bangali people and Bangladesh. Bangabandhu managed to awaken a hope for an independent nation and successfully led it towards achieving the dream. Even after 1971, the speechis still an inspiration for the freedom-loving people.It has reinvigorated and guided us to build up Bangabandhu’s dream ‘Sonar Bangla’.

By Hasan Mahmud Rubel, a Lecturer of a private university