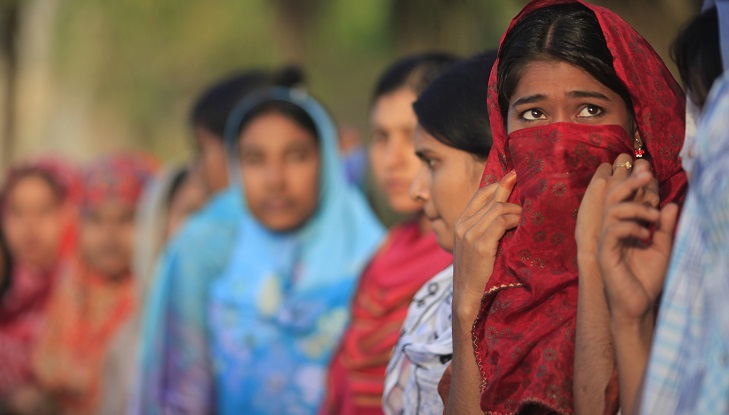 In the last decade Bangladesh saw a phenomenal progress in women’s empowerment in almost all sectors. Incentive for girls’ education positively impacted the enrollment ratio of girls in the primary level.

Previously boys were sent to school by families in rural Bangladesh. Usually one son, either the eldest or the youngest, was sent to the high school and one to Madrasa, while the other had to follow their father’s footsteps. On the other hand girls in rural areas had to learn religious and household essentials to prepare for their future roles basically as housewives. But policy changes mainly under Prime Minister Sheikh Hasina have now transformed the demography of rural Bangladesh. Almost every family is educating their daughters, who too have great enthusiasm in going to schools. This was unimaginable even a couple of decades ago.

Not so long ago, in the villages of Bangladesh, girls were married off as soon as they reached puberty or when an “eligible groom” was in hand.

Educating daughters was the last thing in the parents’ minds in those days as they thought spending on daughter’s education was a bad ‘expenditure’ with no future returns. Thus, they married off daughters as early as possible.

Now the scenario has changed dramatically as more and more parents ‘invest’ in educating daughters, as they manifest sincere eagerness in looking after elderly parents compared to the sons. The change is evident even in the interiors of Bangladesh.

Comparing my past recollections of visits to my grandparents’ village the difference is evident. While my father and uncles were sent off for higher education. But the aunts were married off early with no education. The disparity in treating own children according to their birth order and gender is a form of discrimination unthinkable today.

Each successive visit saw a reduction of my female playmates in the village. Girls were married off to men with “good” jobs or wealth.

The horror of ‘child marriage’ dawned when my favourite cousin was married off early. It was apparently a proposal ‘too good to miss.’ She died under mysterious circumstances few years later. The match, so sadly, that was ‘too good to miss,’ in reality did not let her bloom fully.

Many forward thinking men and women have championed the cause of the girl child, without their active support more girls would have faced child marriages even today.

Doors to immense prospects have opened to crores of Bangladeshi women. Avenues which were unthinkable before are now frequent pathways for our women. For years our pioneering women kept chipping away at the barriers to set the once “weaker sex” free. But the proverbial walls were like those of the fairy tales and after battling today, one finds the whole is back again the next day. Thus, the proverbial wall would not come down!

The most dramatic advances in women’s empowerment came in the wake of Sheikh Hasina becoming prime minister in 1996 and then again from 2009 for three successive terms. Now there is more hope for achieving gender equality as we have many females in key policy making roles and a first ever lieutenant general in the army medical corps, besides full

Secretaries in the civil bureaucracy

We may now have a woman as the country’s next president as per the whispers that is going around. Why not?