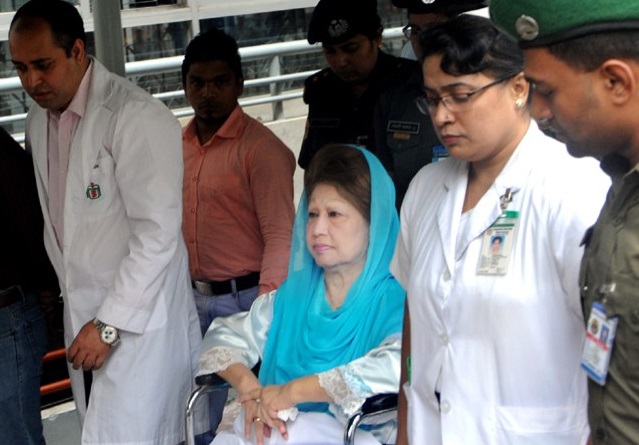 Khaleda Zia’s sister Selima Islam on Saturday urged the government to release the BNP chairperson on humanitarian ground as she is sick.

“Her (Khaleda’s) health condition remains unchanged. She’s facing difficulties in breathing due to her respiratory problem. Her left hand has got bent fully while the right one is also getting bent,” she said while talking to reporters after meeting her sister at Bangabandhu Sheikh Mujib Medical University (BSMMU).

Selima said the BNP chairperson is unable to stand up straight while she is suffering from acute back pain.

“Her physical condition is very bad. She should be released on humanitarian ground. The way her condition has deteriorated, we’re worried whether we would be able to take her [home] from here alive,” she said.

Selima also said Khaleda is unable to eat anything properly due to vomiting problem.

“Under the circumstances, we want the government to free her at least considering the humanitarian aspect,” she reiterated.

Five of Khaleda's family members, including Selima, her younger brother Shamim Eskandar, his wife Kaniz Fatema and son Ovik Eskandar and Selima’s daughter Samiya Eskandar, went to meet Khaleda around 3pm. They stayed there for about one hour and 15 minutes, said Shamsuddin Didar, a member of the BNP chairperson's media wing.