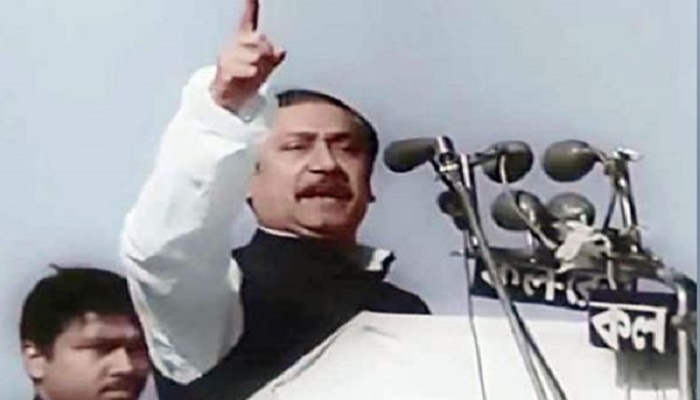 The March 7, 1971 speech of Father of the Nation Bangabandhu Sheikh Mujibur Rahman given to his freedom-seeking people at a critical juncture of this South Asian country’s political history was a master stroke as it was not only an extempore, but he used technical words to proclaim independence of Bangladesh.

To many the 19-minute speech spoke of the genius politician Bangabandhu was best ever appeal for liberating people from the fetter of a tyrannical regime.

He delivered the speech within the legal bounds by asking freedom loving people to prepare for a war without exposing himself to be a separatist.

The then Pakistani rulers could not take any legal action against him as he proclaimed liberation using technical and evasive language.

Bangabandhu used every word very cautiously to avoid any legal action by the Pakistani government. Had he not been cautious about using the words, he would have been tried for sedition case and by all likelyhood —- hanged as they tried by creating the infamous conspiratorial Agartala case.

According to the Wikipedia, the world media had descended upon East Pakistan for the speech amidst speculation that Sheikh Mujib would make a unilateral declaration of independence from Pakistan.

However, keeping in mind the failures of Rhodesia’s unilateral declaration of independence and of the Biafra struggle in Nigeria, Bangabandhu stoped short of doing that in totality.

Talking to the daily sun, Attorney General Mahbubey Alam said common people wanted Bangabandhu to declare war directly against the Pakistani, but he did not do it.

“Had Bangabandhu announced the war for independence directly, he would have been prosecuted for sedition and would not have emerged as the leader of freedom loving people, besides he would not also fail to get global support.”

“While delivering March 7 speech, Bangabandhu was careful about selection of his words. Declaration of independence was camouflaged with evasive language,” the veteran lawyer added.

Renowned historian Prof Muntasir Mamun said Bangabandhu in his March 7 speech described the history of oppression by the Pakistani regime and the context why the situation had necessitated a movement.

Referring to the expression “Our struggle, this time, is a struggle for our independence”, he said “It was clear enough to us that Bangabandhu announced war for our indepence. But the Pakistani regime could not take any legal action for his evasive words.”

Transcending boundary of Bangladesh, the March 7 speech of Bangabandhu has become a magnacarta for freedom-seeking people in any part of the globe, he said.

“The March 7 speech by Bangabandhu inspired us to start our final fight for freedom. It was due to this magnificent and magical speech, Bangladesh was eventually born ... He was evasive in declaring liberation,” Nasim told the daily sun.

“No question, Bangabandhu spoke about independence and sovereignty of the people of East Pakistan in March 7 speech. He wanted to the liberate country. He did not care about any legal consequences” of what he had set his mind to tell millions of Bangalis waiting to get directives from their supreme leader.

Attorney Gneral Alam continued that Bangabandhu’s call for a civil disobedience movement, non-payment of taxes; work abstention by secretariat, public and semi-public offices, and courts in East Pakistan, disconnection of phone lines except in local and inter-district was aimed at warming up the people for an eventual war.

“In the March 7 speech, Bangabandhu precisely narrated history of exploitation of Bangalis by the Pakistani regime and justification of a movement. He said people of East Pakistan were not allowed to go to power in spite of being the majority. Rather, they were subjected to step-mother treatment.”

In these lines, Bangabandhu suggested Bangalis to get ready for “freedom” and “movement” with such eloquence and political wisdom that none could treat him as a separatist, he said.

“I think March 7 speech is not only the best speech ever in the world but also is best ever appeal for liberating people from the fetter of a tyrannical regime.”