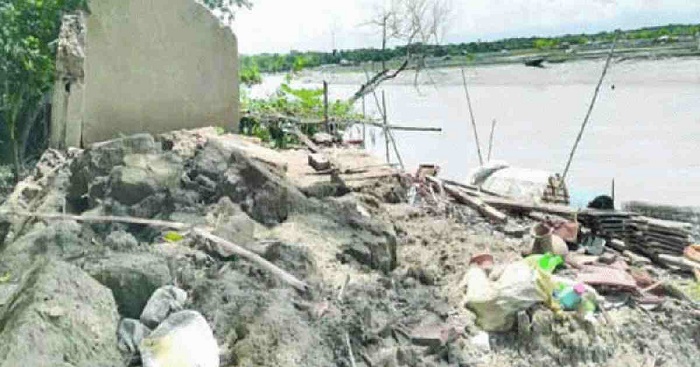 The Kopotakkho River flowing beside the Chougachha town in Jashore district has turned into a garbage dumping ground, thanks to indiscriminate dumping of industrial and household wastes and negligence of the authorities concerned.

Wastes from shops, markets, mills and factories are being openly dumped into the river every day, polluting the water and posing serious health risks.

According to locals, sewers of households, shops of the municipality fall directly into the river for the town’s drainage system. Therefore, raw sewage and animal wastes from slaughter houses get mixed directly with the river water.

People bring garbage on vans at the dead of night so they can throw it all into the river without being seen.

People who live near the river have to tolerate the unmistakable stench coming from the water and are powerless to do anything about it.

Locals said although the government is evicting the illegal encroachments from river banks at various locations in the country, no such step has been seen to prevent the Kopotakkho River from being a garbage dump.

The garbage is not only polluting the water but also pushing up the risks of environmental hazards, they said.

Ebadot Hossain, general secretary of Chougachha Market Traders Association told media that once upon a time, people used the water for cooking, washing clothes, bathing and even drank it.

“Now one cannot even stand beside the river because of the stench coming from animal, industrial and household wastes floating in the water,” he said.

The heavy stench is a constant nuisance for people crossing the river. On the other side, land-grabbers have started occupying a portion of the water body.

“The river has become a designated dumping ground for the municipal town in the upazila, Narayanpur, Kabilpur and Dhuliani bazars as well as for the shops along the river bank,” said businessmen Abdul Mannan, Hafizur Rahman and Anwar Hossain.

“Waterborne diseases are increasing, fish are dying and the livelihood of fishermen along the river bank is being adversely affected,” they added.

Hafizur Rahman, convener of the Jashore district committee of ‘Save the Kopotakkho’ movement,  said they have been trying to protect the river through various awareness programmes.

“A group has turned the river into a garbage dump by force, something that cannot be accepted. There is no alternative than to save the rivers of riverine Bangladesh,” he explained.

Nur-Uddin Al Mamun, mayor of Chougachha municipality, told media that people dump garbage at Bridgeghat since there is no designated place for this purpose.

However, he admitted that dumping different types of wastes into the river is polluting the water and putting the environment as well as the ecosystem at risk.

“I have fixed a new place to dump wastes which will be used very soon,” the mayor added.

“Illegal decks have been evicted from various locations to save the Kopotakkho river,” Jahidul Islam, Upazila Nirbahi Officer (UNO) of Chougachha said.

“Notice has been served to those involved in river grabbing and pollution. Legal action will be taken against them,” he added.