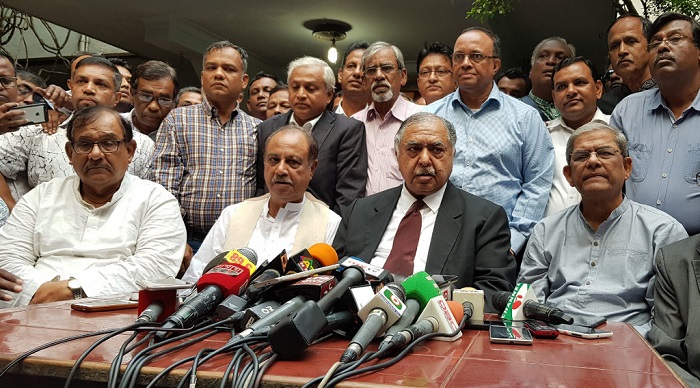 Jatiya Oikya Front, a BNP-dominated opposition coalition, is facing an existential challenge as some of its components are breaking away due to internal conflict in the parties.

The Jatiya Oikya Front’s component Jatiya Samajtantrik Dal (JSD) has split into two factions and another component Gano Forum is likely to divide as the party’s internal conflict has taken a serious turn.

Asked whether JOF will split as its components are breaking away, BNP vice-chairman Mohammad Shahjahan told daily sun, “The conflict is an internal issue among the allies. The parties will resolve their own crises. It will not affect the existence of the coalition.”

BNP insiders said the party leaders observed the context of JOF components and took decision to go almost alone in the current crisis.

“A large number of the BNP leaders want removal of Dr Kamal Hossain from the post of Jatiya Oikya Front’s convener as he has lost his acceptance in the alliance. He cannot protect the unity of his own party Gano Forum, how will he lead such a big coalition?” a central leader of BNP said.

The uncertainty popped up as Dr Kamal Hosssain failed to protect the unity inside his own party which is likely to split if the current situation lingers on, the party insiders said.

The central leaders of Gano Forum have divided into two factions already and are also blaming each other for creating such stalemate in the organisational activities.

“As per the authority given by the special council held in 2019, as a president of the party I’m declaring dissolution of the central committee of Gano Forum which was announced on May 5 last year,” he said in a written statement on Wednesday.

The party has also formed a central convening committee with president Dr Kamal Hossain and general secretary Dr Reza Kibria to discharge all political as well as organisational duties until holding the next council session of Gano Forum.

Mentioning the ongoing stalemate inside Gano Forum, Dr Kamal said the leadership of the newly formed central executive committee created such situation instead of bringing pace in organisational activities.

He mentioned that the special council was held on April 26, 2019 in a bid to resolve organisational drawbacks and the council bestowed authority on the party president to form a strong central committee of Gano Forum.

Earlier on May 5 last year, Gano Forum announced 111-member new committee at a press briefing electing Reza Kibria as the party general secretary and reelecting Kamal Hossain as its president.

Talking to daily sun, Latiful Bari Hamim said as per the party charter, he (Dr Kamal) has no authority to dissolve the central committee.

“We will send a legal notice immediately against it. We will also hold a central executive committee of Gano Forum soon to take the next decision.”

On the other hand, Mokabbir Khan, another leader of the party, claimed that as per the party charter, Gano Forum president has dissolved the committee and the new committee will be formed on time.

Gano Forum insiders said the party is likely to split as a faction is being led by its leaders Shubrata Chowdhury, Abu Sayeed, Mostafa Mohsin Montu, Jolul Haider Afrik and some expelled leaders while another group is spearheaded by Reza Kibria, Mokabbir Khan, Mohsin Rashid and Amin Ahmed Afsari.

Meanwhile, Jatiya Samajtantrik Dal (JSD), another component of JOF, has already divided into two parts. JSD president ASM Abdur Rob was reelected as its president and Sanwar Hossain Talukder made general secretary at the party’s national council held in Dhaka on December 31, 2019.

“We do not accept the committee. We will hold our party’s council session at the Jatiya Press Club on March 20 to form a new committee,” Abdul Malek Ratan, former general secretary of JSD told daily sun.

The Ratan-led JSD faction said Abdul Malek Ratan is likely to be made president while MA Gofran or Ataul Kabir Faruk general secretary of the party.

Asked about the current condition of Jatiya Oikya Front, Shahidullah Kaiser, coordinator of Nagorik Oikya, a component of the opposition alliance told daily sun, “If the internal conflicts of the alliance components continue, the existence of the coalition will be at stake.”

On October 13, 2018, Jatiya Oikya Front was formed with BNP, Gano Forum, Jatiya Samajtantrik Dal, Nagorik Oikya and a faction of Bikalpadhara Bangladesh under the leadership of Dr Kamal Hossain.

On November 5, 2018, KSJL joined the Oikya Front and took part in the December-30 national election with BNP’s symbol—Sheaf of Paddy.  On July 8, 2019, KSJL left the alliance.