Delhi riots: How Muslims' homes were targeted and burnt 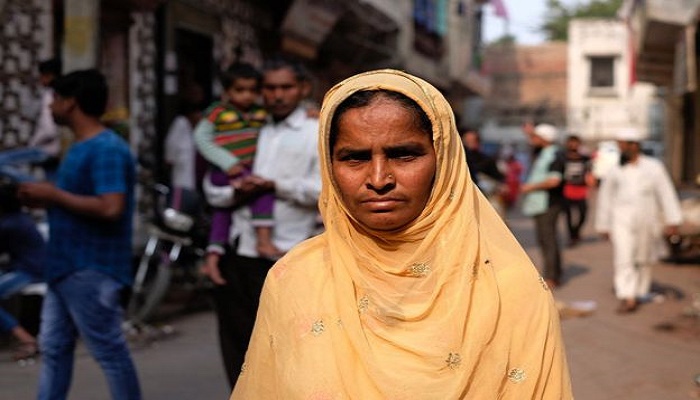 Mohammad Munazir arrived in Delhi decades ago, escaping poverty in his native state of Bihar where his landless father worked on other people's farms for a pittance.

In the beginning, like millions of poor migrants, he lived in a tarped hovel on the fringes of the sprawling Indian capital. He worked in a book binding shop and moved to Khajuri Khas, a gritty neighbourhood in north-east Delhi, which has a literacy rate lower than the national average.

When the book binding shop folded, Mr Munazir decided to start something on own. He bought a cart and rice and chicken and began selling home-cooked biryani. His business thrived - "I was a hero, everybody here loved my food" - cooking 15kg of biryani and making up to 900 rupees ($12.26; £9.60) a day. Things were finally looking up.

Barely three years ago, Mr Munazir and his brother, a local driver, pooled 2.4m rupees from their savings and bought a house - an unremarkable two-storey building in a narrow lane. Each floor had two small, windowless rooms and a tiny kitchen and bathroom. It was cramped for two families but it was home. They even installed an air-conditioner to keep the families comfortable in Delhi's sultry summers.

"It was a nest I finally built for my wife and six children after a lifetime of struggle," says Mr Munazir. "It was the only thing I wanted in life, it was my only dream come true."

The dream ended in flames on a bright, sunny Tuesday morning last week.

Munazir's house was looted and torched by a mob of masked and helmeted young men, who swept into the mixed neighbourhood. They were armed with staves, hockey sticks, stones and bottles filled with petrol, and were chanting "Jai Shri Ram", or "Victory to Lord Ram", a greeting which has been turned into a murder cry by Hindu lynch mobs in recent years.

Khajuri Khas was one of the ragged neighbourhoods engulfed by Delhi's deadliest religious riots in decades, sparked by clashes over a controversial citizenship law. There were no killings here. But three days of fire and fury in north-east Delhi would eventually consume more than 40 lives, leave hundreds wounded and many missing. Millions of dollars worth of property was destroyed. And there's mounting evidence that Muslims were targeted in a planned manner, with numerous well-documented examples showing some police aiding the rioters, or simply looking the other way.

There are some 200 homes and shops in riot-hit lanes of Khajuri Khas, a fifth of them owned by Muslims. However, it is virtually impossible to tell exactly which of the slim, serried structures that dot the untidy skyline are owned by Muslims, and which by their Hindu neighbours. The buildings even share common walls and continuous rooflines.

The only thing the two communities now share are the forlorn streets overflowing with the remains of the violence: broken glass, burnt vehicles, torn schoolbooks, charred bread. A few goats bleating in the rubble of destruction offer signs of life.

"I have no idea whether the rioters were insiders or outsiders. We couldn't see their faces. But how could they identify our shuttered houses without any local help?" asks Mr Munazir.

Overnight, deep distrust has set in between the two communities. Opposite Mr Munazir's now-burnt home is a two-storey building owned by a Hindu neighbour who trades in betel leaves and lives with two sons, who work for a public transport company. For years, Mr Munazir says, the neighbours have coexisted peacefully. "I have even lived as a tenant in his house. He could have come out and tried to reason with the mob," Mr Munazir says. "Maybe my house would have been saved."

On the fateful morning when the mob began spilling into the neighbourhood, Mr Munazir felt a stab of sudden fear. He called the police and fire service. A local Hindu school teacher was trying to placate the armed men and turn them away. "Don't worry, nothing will happen. You go home," he told the anxious Muslims. A young Hindu man was trying to stop a mob from entering another lane. But the rioters refused to listen to their entreaties, and soon surged into the lane. It was then Mr Munazir ran back into his house and bolted the front door.

The mob tried to break open his door, and then turned their attention to a mosque a few doors away, throwing petrol bombs into the building. The police, says Mr Munazir, arrived six hours later, and led the Muslim residents to safety even as the rioters looked on, sometimes slapping and stoning the evacuees. As the newest refugees of religious rioting in India left the lane with the police, the mob entered their homes, burning and looting at will. "You are lucky to be alive," a policeman told Mr Munazir. "We will take you where you want."

He asked to go to a relative's place in a Muslim-dominated lane across the road. When he reached there with his family, he found 70 men, women and children from 11 local families had already taken shelter in three tiny rooms. Among them was a young woman who had tied her six-day-old baby to her waist and jumped three roof tops to safety. All their houses had been destroyed.

The police had helped a few to get to the place, and at least 40 others had been rescued by the Muslim matriarch of the building in an act of remarkable courage.

"We are still wondering why the police didn't return to the neighbourhood and protect our homes. Why didn't they call in reinforcements? Was it wilful or did they not have enough forces?" wonders Fayaz Alam, a distraught young engineer who had come to Delhi to look for a job.

That is why most of the 70 evacuees in Khajuri Khas owe their lives to Mushtari Khatoon, the frail woman who mustered up courage to cross the main road, walk into the riot-hit lanes, and escort Muslim women and children to safety from early in the morning. She braved a seething mob and went up to the lane "four or five times" to escort them nearly a kilometre to her home. The women and children hopped from roof to roof until they found a safe building to exit.

Mrs Khatoon ended up saving more lives than the police did.

"We will have to protect ourselves from now on. Delhi will not save us any more," she says. There's defiance, not resignation, in her voice.