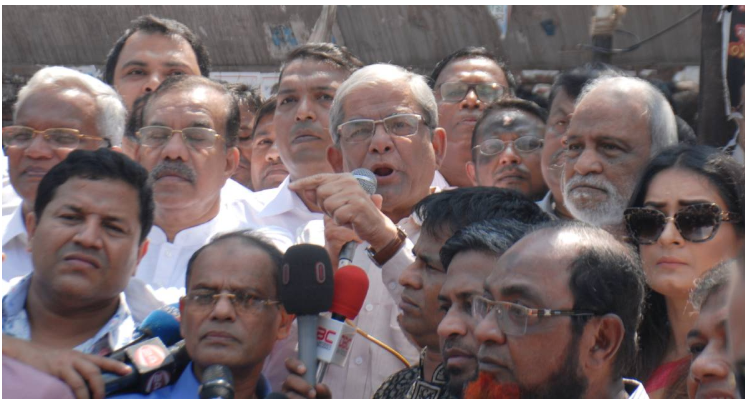 BNP on Tuesday said people will not accept power and water tariff hike as the party thinks the move was taken only to ‘plunder’ public money.

BNP also warned of waging a movement to topple the government if it does not retreat from its decision of raising the prices of the utility services.

“We would like to tell the government to withdraw the power and water hike decision. Or else, you (govt) will be washed away in the face of a strong wave of people,” BNP secretary general Mirza Fakhrul Islam Alamgir told a human-chain programme.

BNP arranged the programme in front of the Jatiya Press Club protesting the recent power and water price hike.

Fakhrul said the Awami League government has increased the water price for over five times and the power tariff for at least eight times in the past to cut public pockets.

"The government has pushed people towards a helplessness condition by raising the tariffs of power and water at a time when the prices of all commodities, including the onion, salt and rice, and the prices of clothes and house rent are growing,” he observed.

The BNP leader also said the government is least bothered about public sufferings since it is not ‘elected’ with people’s votes. “They’ve no sense to understand he sufferings of people.”

Fakhrul alleged that the government cannot resolve the outstanding problems with India and stop border killing due to its knee-jerk foreign policy.

“This is a puppet and subservient regime. It won’t be able to fulfill the hopes and aspirations of people. In this month of independence, I would like to say this government can’t protect our independence. They’re selling our independence,” he observed.

The BNP leader called upon people to wake up to defeat the current ‘monstrous’ government and ensure the rule of people.

Fakhrul said the government has failed to resolve the Rohingya crisis as it is not sincere in this regard. “Many people say they (govt) themselves have kept the Rohingya problem alive for having the support of the western world and making other gains. They also get some share from the aids come from the international community.”

As part of their countrywide scheduled programme, several hundred BNP leaders and activists joined the one-hour human-chain programme that began around 11am.

They chanted various slogans demanding the release of Khaleda Zia immediately, and revoking the decision of raising power and water tariffs.