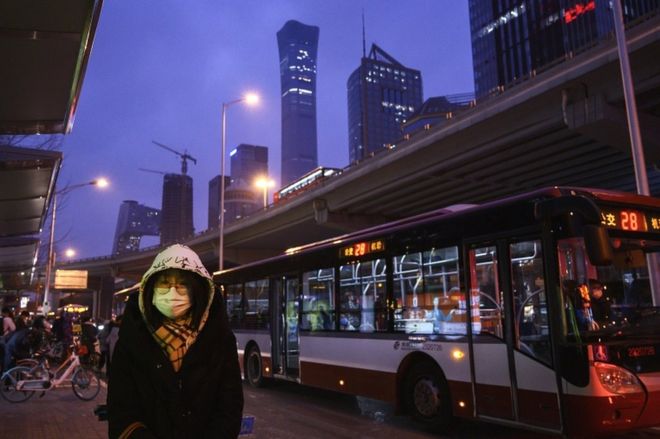 Travellers from countries with severe coronavirus outbreaks who arrive in some parts of China will have to undergo a 14-day quarantine, state media say.

Travellers from the virus hotspots of South Korea, Japan, Iran and Italy arriving in the capital will have to be isolated, a Beijing official has said.

Authorities are worried the virus might be imported back into the country.

Although most virus deaths have been in China, Monday saw nine times more new infections outside China than in.

Shanghai said it would require new arrivals from countries with "relatively serious virus conditions" to be isolated, without naming the countries.

"For the sake of your family's health and safety, please strengthen your precautions, carefully decide on your travel plans and minimise mobility," officials in one southern Chinese province said.

China reported 125 new virus cases on Tuesday - the lowest number of new daily infections in six weeks. There were also 31 more deaths - all in Hubei province, where the virus emerged.China orders travellers quarantined amid outbreak

There are now almost 90,000 cases worldwide in about 70 countries, although the vast majority - just under 90% - remain in China, and most of those are in Hubei province where the virus originated late last year.

Of the nearly 8,800 cases outside China, 81% are in four countries - Iran, South Korea, Italy and Japan.

One of the countries worst affected outside China - Italy - said on Monday that the death toll there had risen by 18 to 52. There are 1,835 confirmed cases, most of them in the Lombardy and Veneto areas of the north. Nearly 150 people are said to have recovered.

However, the country is seeing a slowdown in new cases. On Monday, the authorities said there were 258 new cases of the virus - a 16% increase on the previous day - after new cases spiked by 50% on Sunday.