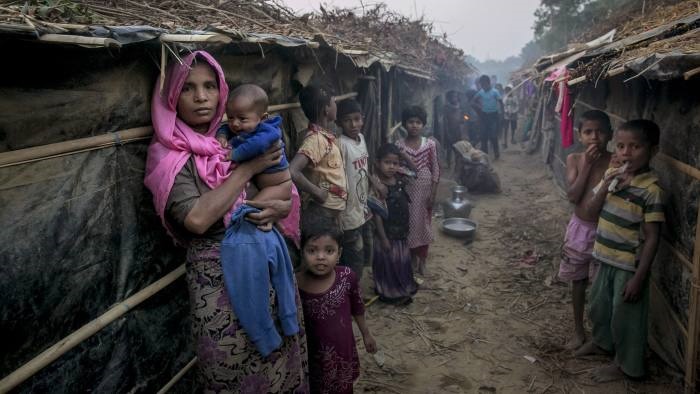 Lawmen seized an engine trawler with 35 rohingya citizens, mostly female from the Bay of Bengal while they were on the way to Malaysia.

“They were preparing for going to Malaysia illegally by an engine trawler,” the OC added.

Meanwhile, another Rohingya citizen has been caught in Khulna on Monday when he went there to make a passport.

He was identified as Ekramullah, 22, hailing from Merullah area of Arakan province in Myanmar, police said.  He came to Bangladesh about two to three years ago. His mother Arfa Khatun is now staying in Rohingya camp in Cox’s bazaar, police said.

On February 14, nearly 50 Rohingya citizens had been detained at sea by Myanmar’s navy while trying to flee. Thousands of Rohingya people have taken to the sea over the years in high-risk attempts to escape the sprawling refugee camps in Bangladesh and oppressive conditions in Rakhine.

Some 740,000 Rohingyas fled Myanmar’s Rakhine to Bangladesh to escape a brutal military crackdown in 2017 and are now languishing in sprawling refugee camps.

Hundreds of thousands more remain in Rakhine, living under tight restrictions with little access to healthcare, education or livelihoods in conditions Amnesty International brands as “apartheid”.

The group detained at sea this week is just the latest in a series of arrests in recent months as seasonal calmer waters tempt more Rohingyas to put their lives in the hands of traffickers. Last month, at least 15 Rohingya refugees drowned when an overloaded boat carrying mostly women and children sank as it tried to reach Malaysia from Bangladesh.

Detective sources said trapped by the human-traffickers, the Rohingya citizens are fleeing their camps for going to Malaysia and Thailand by engine-trawler on the river route of the Bay of Bengal to make their fortune risking their lives.

According to the detective sources, organized human-traffickers have selected different coastal areas including Teknaf, Kutubdia, Katabunia, Maheshkhali and Hariakhali under Cox’s Bazar and the port city Chittagong in the Bay of Bengal as safe routes for trafficking to Malaysia and Thailand poor Bangladeshi fortune-seekers including Rohingyas.

The poor and ignorant Bangladeshi people with voyage on long naval routes by tiny engine-trawlers are usually trapped under stormy wind and other natural disaster and lose their valuable lives.

In 2016, after a discovery of about 30 mass graves in Thai deep jungle, law enforcers of both Thailand and Bangladesh launched massive crackdown against human traffickers.

Bodies of over 30 Rohingas in Myanmar and Bangladeshi fortune-seeker were found in these mass graves in a single southern Thai province nearby Malaysia border.

According to the police record, several thousand people have been rescued from the clutches of human-traffickers over the last several years.

But in most cases, their traffickers remain out of reach. The cleaver traffickers in most of the cases manage to flee the scene.

According to police record, several thousand people seeking to migrate to Malaysia were killed in the past several years as boats carrying them sank off the coasts near Cox’s Bazar.

Thousands of refugees attempt to flee the camps each year in pursuit of better opportunities in countries such as Malaysia and Thailand.

So far this year, law enforcement agencies in Bangladesh have rescued over 400 Rohingya refugees from coastal villages in recent days as they were waiting to board the boats bound for Malaysia.

Recognizing the dangers they face at sea, the UN has been working with the government authorities to raise awareness among refugees and local people about the risk they may face.

The UN is also supporting to strengthen the law enforcement capacities to address human trafficking.