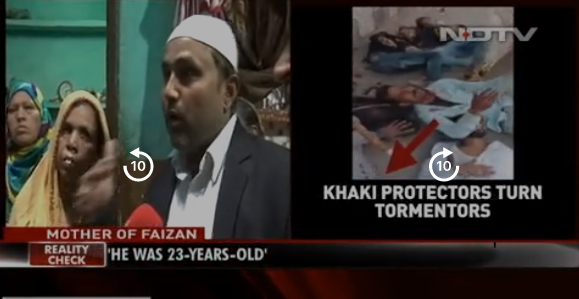 A 23-year-old man seen in a viral video from Delhi, in which policemen can be seen making him and four other young men sing the national anthem, has died of his injuries.

The man has been identified as Faizan, a resident of Kardampuri in northeast Delhi, one of the areas hit by violence.

The video emerged during the four days of unprecedented violence over the citizenship law in a part of Delhi, in which 42 people have died and hundreds injured. Faizan died on Thursday.

The video from northeast Delhi - verified by fact-checking website AltNews -  shows five men, injured, lying on a road and singing the national anthem. Some of them are being made to sing the national anthem. A group of policemen in riot gear can be seen standing around the men. Two of them are pointing their lathis on the faces of the men. "Acchi tarah gaa (sing well)," a male voice can be heard saying.

Faizan was declared dead at Delhi's Guru Teg Bahadur (GTB) Hospital. His family alleges he and the other men seen in the video were taken into police custody and beaten.

"He and the others was beaten up badly. He was beaten with iron rods. His legs were broken. His entire body had turned black because of the beatings. First, he was beaten up on the road. They (the police) must have taken him away. But I don't know about that," Faizan's mother told NDTV.

"Someone I knew recognised him (Faizan) and informed me, I went to the hospital, When I could not find him there, I went to the police station in Jyoti Colony. He was there, I showed them (the police) the photo, The police confirmed that he was there. I asked to meet him and to get him released. They didn't let him meet me. I waited till 1 am," she added.

Faizan's mother said when she returned to the police station the next morning with two others, they were threatened with detention.  "They called me up at 11 pm when he was almost dying," she said.

"He did not participate in the protest," another relative said.

After Faizan was released by the police, the family took him to a local doctor.

"When he came to me, his mother was saying that the police had beaten him and that the police took him to the station and left him after two days," Dr Khaliq Ahmed 'Sherwani', who runs a clinic in Kardampuri, told NDTV.

"His blood pressure and pulse were low. He had to be sent to the hospital. He had head injuries and internal injuries. His back was blue with injuries," the doctor said.

When asked about the video on Tuesday, Delhi Police's public relations officer MS Randhawa had said that they are investigating it.

The police said over 500 people have been detained for the violence in northeast Delhi. There are allegations that at many places, where clashes between those who supported the Citizenship (Amendment) Act and those who opposed it were going on, there was no to minimal police presence. Delhi Police had received about 13,200 distress calls during the four days when the northeastern part of the city was rocked by violence, but call records of police stations in the affected areas raise serious doubts over the response to those calls.