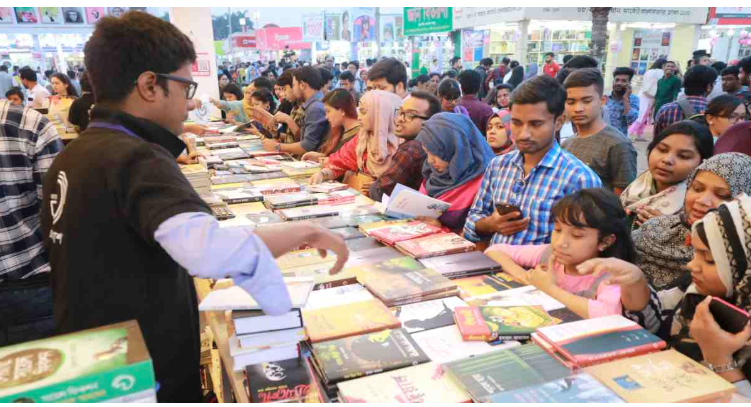 The month-long Amar Ekushey Book Fair ended on Saturday amid a record publication of books and fanfare.

State Minister for Cultural Affairs KM Khalid was present as the chief guest while President of Bangla Academy Emeritus Professor Anisuzzaman presided over the concluding ceremony.

Director of the Academy and member secretary of the Amar Ekushey Book Fair 2020 Jalal Ahmed presented the report of the fair while Director General of the Academy Habibullah Siraji delivered the welcome speech.

The number of books published this year was higher than the two previous years. On the last day of the fair, 184 books were released.

Jalal Ahmed said 4,919 books came out during the just-concluded fair but a special committee deemed only 706 of them to be up to the mark.

He said the total sale was Tk 82 crore while the Bangla Academy sold books worth Tk 2.33 crore.

Director General of Bangla Academy Habibullah said they will solve all problems in consultation with stakeholders before the next book fair.

At the closing ceremony, Bangla Academy handed over awards to the winners of its “Gunijon Sahitya Puroskar” chosen from among the publishing houses participating at the Amar Ekushey Book Fair.

‘Kothaprokash’ received the ‘Chittaranjan Saha Smriti Puroskar 2020’, while ‘Munier Chowdhury Smriti Puraskar 2020’ was given for the publication of aesthetically rich and standard content in books published in 2020.

Syed Waliullah Literature Award-2018 was given to the writer Salma Bani and Sagufta Sharmin Tania in the programme.

This year, Bangla Academy set the theme 'Birth Centenary of Bangabandhu' for the fair as it was dedicated to the iconic leader, marking his birth centenary. The book fair held daily discussions on Bangabandhu at the main stage of the Academy premises throughout the month.

Focusing on Bangabandhu, architect Enamul Karim Nirjhar drew up the overall plan of the book fair. The main attraction of the inauguration ceremony was the official publication of the third book written by Bangabandhu Sheikh Mujibur Rahman, titled "Amar Dekha Naya Chin" (The New China as I Saw).

Prime Minister Sheikh Hasina, also the daughter of Bangabandhu, unveiled the cover of the book.

Like the previous years, the venue of the fair has been extended to the nearby Suhrawardy Udyan with some changes. This year, the little magazine chattar was moved to the main fair premises at Suhrawardy Udyan.

This year, land earmarked for the fair was expanded to 8,00,000 square ft. A total of 873 units were allocated to 560 organisations.