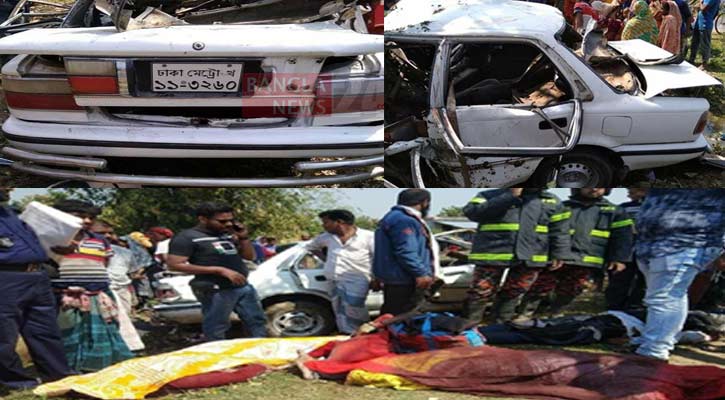 Seven people, including four of a family, were killed and two others injured as a private car crashed into a roadside tree at Kadirpur in Godagari upazila of Rajshahi on Saturday.

The deceased were identified as Akkas Ali, 40, his wife Hosneara, 35, their daughter Musfira, 8, and four-month-old son Hasan Ali, of Monnaffermor in the city, Asia, 30, wife of Ramjan of Godagari upazila and driver Mahanubur Rahman, 40, of Meherchandi in the city.

The accident took place on Rajshahi-Chapainawabganj highway around noon while they were going to attend a marriage ceremony, said Md Shahidullah, superintendent of Rajshahi Metropolitan Police (RMP).

Khairul Islam, officer-in-charge of Godagari Police Station, said three people, including the baby girl, were killed on the spot and four other suffered injuries.

On information, police recovered the bodies and sent the injured, including two children, to Rajshahi Medical College Hospital where they died, the OC added.

Three of the deceased were preliminary identified as Ashiya Begum, 35, wife of Ramzan Ali, Akkash Ali, 40, son of Fazlur Rahman and driver of the car Mahbubur Rahman, 35. But identity of another woman and baby couldn’t be known immediately, said Khairul Islam, Officer-in-Charge of Godagari Police Station.

Quoting local people the police officer said the private car with eight people on board was heading to a wedding function but turned turtle and hit a roadside tree as its driver lost control over his steering at around 1.15 pm killing three people on the spot.

The five other injured people were rushed to Rajshahi Medical College Hospital immediately where four others succumbed to their injuries, the police officer added.